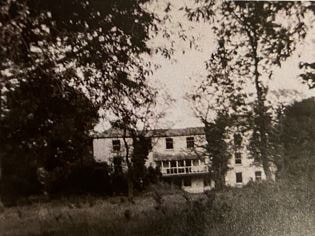 GENERAL                  This was the home of John Skipton Mulvany (1813 -1870), Architect, but prior to
that it was the home of Simeon Boileau.  It was a three storey, six bay Georgian house with two bow
projections to the front, it had a boat house, a lake and a sluice.  The gatelodge, no longer extant was
on the upper Kilmacud road near Lakewood Lawns.  The land was owned by the Arabin family in the
1840's.  J S Mulvany was still the proprietor in 1856 but had had a tenant installed in the house and
the house and lands were up for sale.  In 1858 the land was leased to Robert Maunsell of Rockmount,
Dundrum by Mr J Precious Clarke.  It was subsequently leased to the Rev  James Ivor.  It was the subject
of a legal dispute in 1879 as the​ house and lands had not been upkept, it was described as almost
ruinous with a leaky roof and the plasterwork destroyed by rain.  The window panes were smashed
and doors were missing their locks and handles.  There was coal stored in the best bedroom and the
drawing room had its fireplace boarded up.  The gardens were a wilderness and the gatelodge was
being used as a cow shed.  30 acres of the land was sold off in lots in 1878.

The Irish Motor Racing Club used the land for autocross events in the  early 1960's.  Planning permission
was eventually granted in 1964.  Dublin City Council raised concerns about the lack of drainage provided
in the plans ​and that surface water would just flow into the Redesdale stream.