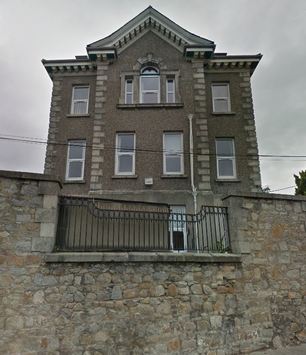 GENERAL                Rockfield House was built c1760 on the 200 acre Rockfield Estate and
is reminiscent of a French Georgian Chateau with a splayed high apex roof.  A three storey
over basement with five bays with a beautifully carved Venetian window on the top storey
above the entrance.  It is now part of Cluain Mhuire run by St John of God.  Its facade is
protected, as are its entrance gates and piers topped with pineapples on Temple Hill
together with gatelodge (just beside the ESB sub-station) possibly by LA McDonnell in
1905.   *The house was split in the 1920's/30's . 'The larger part of the house with its entrance
through the granite piers on Newtownpark Avenue retained the name Rockfield, while the
part facing onto Newtownpark Avenue was named Garramore and given a new entrance
(still extant) further up Newtownpark Avenue.'   Between 1914 and 1917 it became Rockfield
Auxiliary Hospital.  The Southern wing (ugly and not protected) was added c1900.  It now sits
on just over 4 acres.