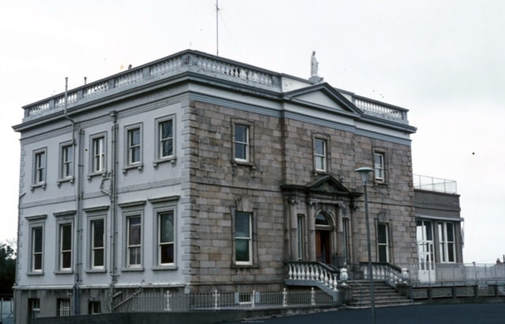 MAP LOCATION              OSI maps of 1838-1845 and 1898-1913 place it in the townland of Seapoint
Templehill and is annotated at Temple Hill on both maps.  Seapoint, Templehill
was part of Stillorgan until the Norman conquest.  By the dissolution of the
monasteries it was called Newtown and in the 16th Century is was known as
Newtown Castle Byrne but by the 18th century it was known as The Black Rock
before becoming Blackrock.

GENERAL                         Neptune on Temple Hill renamed Temple Hill House circa 1782 is a two storey
over basement, Georgian Villa.  It's a three-bay building of fine cut-granite with a pedimented doorcase
and Doric pilasters.  It is set on a slope on an elevated site.  Inside the front door is a double-height front
hall and throughout the ground floor there is carefully restored neo-classical plasterwork attributed to
the stuccodore Patrick Osborne.  The original part of the house extends to approx. 13,000sq ft.  The
three reception rooms on the ground floor still have their cornices and coving intact.  It was the home to
the Earl of Clonmell, aka Copper Face Jack, (a nickname he acquired for his aggressiveness in argument
and the colour of his cheeks) who was Chief Justice of the King's Bench in 1784.​

In 1783 Neptune on 30 acres was for let and in 1807 it was again for let, described as a commodious
house with stabling for 20 horses and a coach house for 4 carriages.  The demesne was surrounded by a
12' wall and the gardens had fruit trees as well as ornamental planting (designed by Thomas Leggett,
landscaper of Marlay Park and Attington Park in Shropshire) and 11 hot houses on 9 acres with gatelodge.
Land from this estate was sold in 1859 by Robert Gray for the establishment of a Quaker burial ground.
His son Thomas was the incumbent of Stillorgan Church from 1858 to 1872.

Between 1947 and 1975, 572 children are reported as being "exported" to America from Temple Hill
House.  Babies were sent to St Patrick's Infant Hospital, Temple Hill before being adopted.  Mothers did
not live at Temple Hill and from the death register it would appear that these woman were in the main
domestic servants, their children registered in large numbers before they reached 6 months as dying
from gastroenteritis or similar.  In the late 1980's the house was purported to have been used by Sinn
Féin and the Irish government for secret meetings in the lead up to the peace talks.​