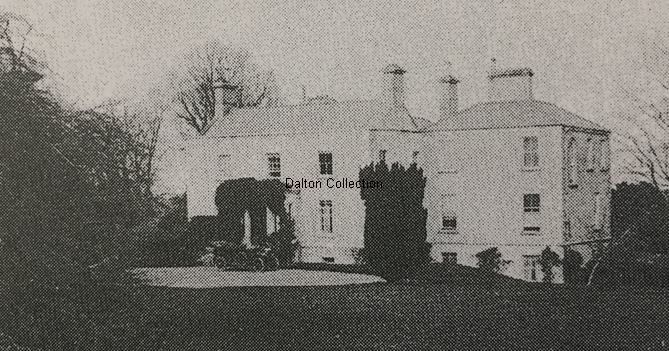 GENERAL                 Georgian style house, two storeys over basement.  Originally it had a three bay front but was
extended with the addition of  two story over basement wing to the south of the property.  The entrance porch
with pillars are to the original part of the house.  The house became known as Taney House in 1883 and was
completely renovated by the Jameson family in the early 1900s.   The gate lodge was on Taney Hill and no longer
survives.  The house was converted into flats in 1941.  All the remains is a lone, cut granite gate pillar with
'House' etched into the stone on Taney Road near the entrance to Taney Rise.

An interesting occupant was Martha Bradford nee Wilmot who died here in 1873.  Her sister Catherine having a
desire to travel joined Lady & Lord Mount Cashel on a tour of the continent and it was arranged by Mrs Hamilton,
her fathers cousin, that Martha would go Russia and stay with the Princess Daschkar, Lady of Honour to Catherine
II, Empress of All the Russias whom she had met when the Princess had toured Ireland.  Martha set off in 1803 and
spent five years in Russia and became the Princess's most intimate friend.  In 1808 her parents insisted that she
return home, this was a very sad parting and the Princess died shortly after Martha's departure.