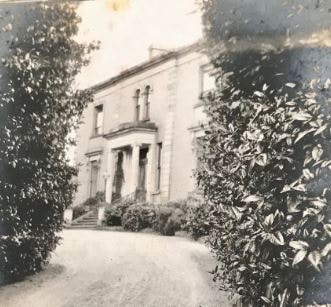 AREA LOCATION        To the west of the Goatstown Road, between what is now Larchfield
Park and Mount Carmel Road.  OSI maps of 1838-1845 and 1898-1913
place it in the townland of Roebuck and it is annotated as Roebuck
Park on both.
​
GENERAL                      A Victorian house with a fine cut granite portico approached by seven
granite steps and a cast iron ornate balustrade.  Two storey over basement five bay house
with double arched windows above the portico.  The property had two gatelodges, one on
Goatstown Road, close to the small green at Larchfield which was built circa 1845 by George
Kinahan which is longer extant.  A new entrance to the south was created circa 1820 which
led to Taney Road.  The lodge at the entrance on the corner of Taney Park has survived along
with one of the rusticated granite entrance pillars.  It is built to a L-plan with a hipped roof and
a gabled end.  Above the architraved door there is a floral roundel and the build is thought to
be work of Millar & Symes who were contracted to carry out alterations and additions in 1820.

In 1919 it was for sale on 45 acres with a long carriage drive and a gatelodge within 15 minutes
walk of Clonskea tram.

The land was sold off for development circa 1950 and by 1952 one hundred houses had been
built in the park, the shops were built and another 400 houses were under construction.  In
1955 the Corporation issued a CPO on 3.5 acres of Roebuck Park for use as amenity space.  In
1993 Samastra Holdings were granted permission to restore and convert the house into 13
apartments and to build 13 houses in the remaining grounds.  The houses were built in the
grounds and Moorview Development Ltd applied for permission to demolish the house which
was now surrounded by hoarding and had been set on fire.   DLRCoCo issued an order to
demolish on safety grounds and it was demolished by May 1995.