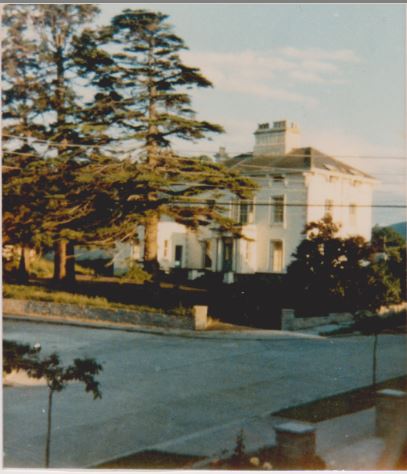 GENERAL           In 1890 it was described in the sale notice as ' . . . one of the most charming
residences in Dundrum, standing upon 13 acres . . . the house with 3 fine reception room
approached from a beautifully tiled hall, 8 bed and dressing rooms wc, bath and storeroom and
excellent basement, gas water throughout . . . gdns . . . tennis and bowling green, 4 conservatories
(greenhse, hot hse, peach hse, and fernery) Gate lodge etc.  In 1968 the sale notice read ‘absolutely
superb condition. . . 4 reception rooms, 7 Bedrooms, 4 Bathrooms, 7 toilets, newly fitted kitchen,
scullery and a pantry, Radiators in all rooms.’  Prior to this it was St Stephen’s School.  J J Jennings seeks
permission to demolish having been so badly damaged after a number of years as a temporary home
for refugees.​

*‘My memories of Drummartin [House, from the 1930's] was of a great square building on three
levels.  On the ground floor there were two bedrooms, three large reception rooms with floor to ceiling
shuttered windows, which looked out on the various gardens and a fine tennis court. The entrance hall
had double doors, the inner one opening into a mosaic tiled hall in mainly rust and yellow. Concealed
from immediate view was a beautiful mahogany staircase which went right to the top of the house
servicing each floor. On the first of these floors was a small room which was always kept for any visiting
clergy. The room was always out of bounds for us children, so was a constant source of curiosity. On
the next floor there were four large bedrooms and a small room that was fitted out as an oratory. This
small prayer room had a hand carved miniature alter with statues of the saints. There were also kneelers
and seats where you could pray. The next floor up was a replica of the first floor.  There was another
unique feature of this house an oval shaped, maple floor ballroom which opened through double doors
to the paddock.  In the grounds there was an orchard and alongside it was the tennis court. Steep granite
steps led to the service area. The kitchen area was large with two wooden tables and a great black coal
burning range. The walls were red having been painted with distemper, as were several alcoves and the
pantries. In an outhouse off the kitchen was a well with an old hand pump. My memory was of the pump
making a loud grinding noise’, by Ena Maguire (née Sherry) granddaughter of Margaret Connolly.