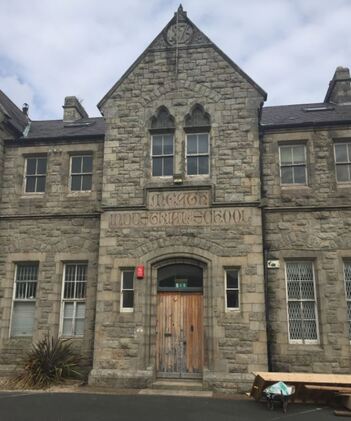 GENERAL                The school opened at Elm Cliff in 1871 and was registered by the Marquis of
Hartington on 5th May.  Whilst the school was a reform school, it also took in boys who were found
to be destitute on the streets by use of detention orders.  The committee only had a short lease
on the house and in 1876 they had 48 boys at Elm Cliff, and the house was in a poor condition.
The committee were offered a lease on land at Merrion Road but this turned out to be too small a
site, so a site of 10 acres was purchased on Carysfort Avenue at a cost of £1800.  The project was
costed at £6300.   The plan was to use some of the site as a market garden.  The move to
Carysfort happened in 1877 when the main building was finished but facilities like laundries and
workshops were yet to be built.  They were certified as having capacity for 100 boys.  The boys were
taught English, arithmetic, writing, spelling and geography.  The learned shoe making, tailoring,
watchmaking and jewel setting.  They also made small items of furniture including stools which
were on sale to the public.  In 1881 Edward Cecil Guinness presented the committee with a
cheque for £60 in order to purchase musical instruments and form a school band.  In 1895 a
gymnasium (76' x 36') was built on the site, the architect was James Franklin Fuller. The census of
1911 shows 137 pupils in the building.   The poet James Stephen (1883 -1950) was educated here.

In 1917 the premises were taken over by the British Army as an Military Orthopaedic Hospital
following the mounting casualties on the Western front and the boys were transferred to Balmoral
Industrial School in Belfast.  The Military Orthopaedic Hospital on Carysfort Avenue treated patients
between 1917 and 1931.  It dealt mainly with amputees and supplied and fitted prosthetic limbs
for ex-servicemen.  It had beds for more than 500 patients and remained open until 1931 when
patients were transferred to Leopardstown Park Hospital.