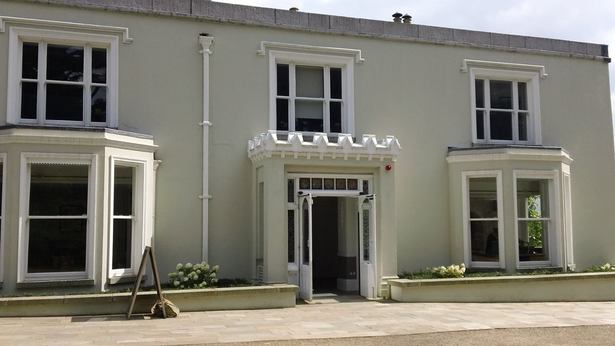 GENERAL                The name was changed from Bess Mount to Airfield circa 1836.  It has
an Arts & Craft style gatelodge.  Two storey, three bay with hood moulds.  It has a heavily
castellated porch and the door has a gothic feel.  Airfield is synonymous with the eccentric
Overend sisters who kept a 1927 Rolls Royce which they maintained themselves.  They also
had an Austin 10 Tickford and a Peugeot Quadrilette.   Apparantely when asked by her father
what she would like for her 21st birthday, Letitia replied, 'A Roll Royce, it will last me all my
life",  and it did.

The house was also home to another strong woman - Margaret Jury nee Cotton.  When her
husband of 18 years died in a tragic accident (he fell from his bedroom window while visiting
friends in Bristol), she was left the onerous task of running the Shelbourne Hotel.

Naomi and Letitia left the 34 acre Victorian farm in trust for 'Education and Public Use'.  After
Naomi's death the contents of the house was sold which raised 1.3 Million, mainly due to the sale
of their James Hicks furniture.  In a bid to keep the farm open to the public the trustees sold off
some land, including Dudley's field which caused public outcry and the land was rezoned as
residential use in 2003.  The sister's hope that their Victorian farm would remain just that, was
probably too much to expect in a era of rampant commercialism but Airfield is still a working
farm open to the public with gardens and restaurant hosting weddings events and children's
activities.