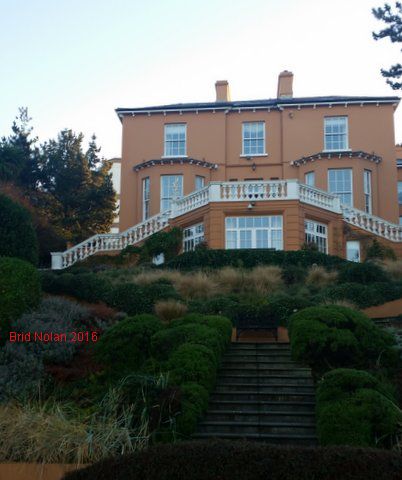 ​Fairyhill/Deepwell
The original house was part of a seaside development orchestrated by Miss Julia Ann Blosset.  Recognising the potential of this undeveloped area, Julia purchased from the Rt. Hon. Lord Viscount Fitzwilliam, the leasehold interest in a 2 acre plot for a term of 99 years.  On this site and an additional plot extending to the current Bath Avenue, she built two houses and six handsome cabins.  The larger property, which she named ‘Fairy Hill’ became her home until her marriage to Charles Vallancey in 1766.  Prior to her intended nuptials Julia transferred the leasehold interest to her sister Susanna.  An astute business-woman, her action may have been influenced by the marital status of her future husband who was a widower with nine children.

James Ormsby was the principle beneficiary of Susanna’s estate.  He did not live at ‘Fairy Hill’, which was occupied firstly by Dublin barrister Richard Hetherington who in consideration of the sum of £200 purchased tenancy for a period of 47 years, subject to an annual rent of £45.  Hetherington later conveyed his interest in the property to John Cuthbert, who in 1808 paid £300 to secure tenure until 1849, in line with the original lease.  Following Cuthbert’s death, c.1818, ‘Fairy Hill’ was continuously on the market and in February 1822, in an unusual turn of events, a raffle of the property was arranged.  Tickets were sold for £5 each subject to a maximum of two hundred.  It is unclear if the raffle ever took place but ‘Fairy Hill’ remained for sale for a further twenty years.  Newspaper advertisements describe a ‘most salubrious’ bathing lodge and pleasure garden with a river running through it and private bathing area at the end of the lawn.  The house contained ‘a parlour 27 feet by 16 which overlooks the sea, a handsome drawing room, four best rooms, servants’ rooms ... and every other suitable accommodation’.

In 1842 ‘Fairy Hill’ was purchased by Richard Samuel Guinness and his wife Katherine.  Richard encountered financial difficulties resulting in forfeiture of the property which was redeemed in 1851 by his cousin Arthur Lee Guinness.  The property was placed in trust for the lives of Richard’s wife Katherine and their eight children.  The Guinness family renamed the property ‘Deepwell’ and are credited with construction of the Palladian style maritime residence which is the envy of twenty-first century Dart commuters.
​
‘Deepwell’ was renovated and extended during the tenure of the Reihill family who added an extra wing and replaced the fireplaces with elaborate period pieces reclaimed, from various properties including Clonmel House, Harcourt St.  The gardens, redesigned in 1995 by Mitchell and Associates Dublin and Helen Dublin, were awarded first prize by the Irish Institute of Landscape Gardeners.