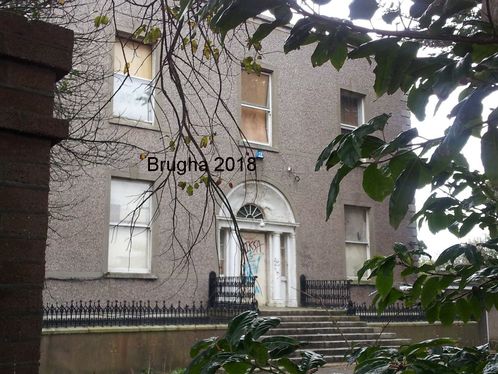 AREA LOCATION    Dundrum, beside the AIB Bank on the Clonskeagh Road.

GENERAL                 Georgian three bay, two storey over basement, rough dash to external walls,
slate roof and sash windows.  Classical entrance, well preserved approached by granite steps and
decorative railings.  It has a hipped slated roof set behind granite parapet and granite quoins to
front elevation.   Its entrance was originally a curved drive with gatelodge from Clonskeagh Road
(junction of Belfield Close and Nutgrove Park.  As its gardens were sold off for building the
entrance was moved to Wynnsward Park in the 1940's and now fronts the Clonskeagh Road.  The
house was considered to be in well maintained and in good structural and decorative condition in
2014.  The original coach house was still in situ as were 34 mature trees in 2014 also.  Many original
features survive including a shell decorated ceiling, window surrounds, architraves and skirting
boards.  Originally this house was just known as Roebuck in the 1820's, later Roebuck House and in
1868 the name was changed to Winstay.

‘Upon this holding there is an extensive mansion house three stories high consisting of parlour, drawing
room, six bed chambers and two closets with a basement story containing kitchen and servants
​apartments.’ (Brassington 1832)