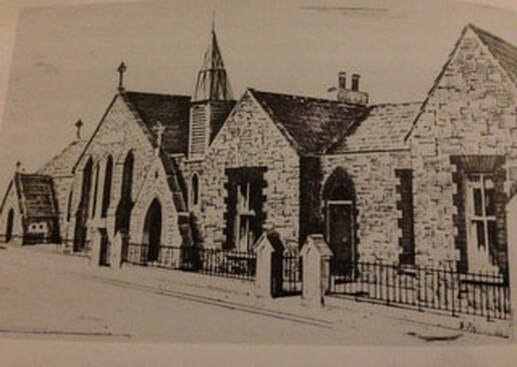 In 1865 a decision to endow a Chapel of Ease for Stillorgan and Kilmacud was taken by the Very
Rev Monsignor Canon Forde, DD, PP, Vicar General.  Land was donated by Robert Hoey to build a
church at Kilmacud according to parish magazine of 1984 (but no deed has been found between
1860 and 1869).   According to the Rev N Donnelly, DD, Lord Bishop of Canea, in his short histories
of 1906, part of the church was built from the schoolhouse under the charge of the sisters of Mercy
in Booterstown as the school was no longer required.  £youwho500 was raised by subscription and £650
was borrowed.

In 1866 a Grand Prize Drawing was held to raise money to finish the Church of St Laurence O’Toole.
Tickets were 1d or 2d and prizes on offer included a piano, a gold watch, a chest of tea and 3 tons of
coal.  Rev N Donnelly refers to the Church as being called SS Laurence and Cuthbert at Kilmacud and that
a presbytery was also built at this time.  The Church opened with a Vincentian Mission in 1868.  The
granite church was opened and dedicated to St Laurence & St Cuthbert in May 1867 according to 1984
Parish Magazine.  Thom’s directories of 1868 onwards refer to it as St Laurence O’Toole’s R C Church
and there is no mention of St Cuthbert.  Parish registers refer to it as Kilmacud Chapel.  In 1887
Christopher Palles presented a valuable service of plate to the church and erected a memorial window
to his wife.  In 1888 parish debt was £1100 and Archbishop Walsh offered to subscribe £500 (from the
residue of Monsignor Farrell’s assets that had been bequeathed to him) if the parishioners would
subscribe £600.  By Christmas of the following year the condition was met.  Lord Pembroke subscribed
£200 and Chief Baron Palles subscribed £100.   Circa 1952 an extension to the Church was built to
accommodate growing numbers, this extension housed a Eucharistic window.  It had a small spire
which is no longer extant.

After the new Church of St Laurence O’Toole was built in 1969, the old church was used as a parish
hall and the presbytery used as a scout den.  In 1985 Kevin Harington, a local historian
photographed the church, including the windows, these photos are now held by the Architectural
Archives at Merrion Square.

The Sisters of Our Lady of Charity donated a site, and the Church of St Laurence O’Toole was opened
on 14 Dec 1969 by the Archbishop Most Rev John Charles McQuaid.  Architect were Stephenson Gibney & Associates
and in 2016 it was renovated GKMP Architects