Stillorgan Genealogy & History
The Stillorgan Reservoir, known locally as 'The Rez/Res' or “The Waterworks” but officially named 'The Prince of Wales Reservoir'.

From 1854 Dublin Corporation were looking to improve the water supply.  A Royal Commission was set up and by 1860 notices appeared in newspapers for a reservoir or tank to be situated in Stillorgan.  Although the Vartry supply was the most expensive option it was deemed to be the best solution with clean, soft water and was designed to reduce the risk of cholera, typhus and other diseases associated with contaminated water. The alternative was to upgrade the water supply from the canals which was inadequate and was also unsafe as Dublin had been subjected to periodic visitations of waterborne disease.   The chairman of the waterworks committee was Sir John Gray of Qui Si Sana, Blackrock who was honoured by a statue in O’Connell Street.   The plan was in two parts, to take water from the Vartry River at Roundwood, through a tunnel (Callowhill), six feet high, five feet wide and 2.5 miles long, with eight airshafts.  and traversing land, bring the water to Eustace Bridge (Leeson Street Bridge).  The Vartry Waterworks comprised an earthen dam sixty six feet high, with slow sand filters.  The second part was to build a holding basin at Stillorgan.  The estimate was £216,335. 00.  Work on the tunnel began in January 1863 and was completed in September 1866.

Originally the land for the Stillorgan Reservoir chosen were lands in the townland of Tipperstown and Galloping Green South, adjacent to Stillorgan Railway Station, this was land that Ms Frances Guinness (The Grange) and Mr Bentley (Foxrock) occupied but this proved to be rather expensive at a cost of £95,000, instead land was offered by Mr Wilson of Westbury (St Raphaela’s and the gardens of Clonmore) at a cost of £10,200, this vast price difference did not pass without comment.  There were many objections to the scheme with the opposition, chiefly the canal companies, quoting that the construction was under estimated and that costs could run to £250,000 and that it would be cheaper and better to spend £100,000 on upgrading the canal water supply.

In July 1862 it was suggested that Stillorgan should hold water for 8-9 days rather than the 3 day supply originally envisaged.  Plans were adjusted, as was the price to £276,000.
​
On the 28th August 1862, the Lord Mayor took possession of 26 acres from Mr Wilson and the first sod was turned on two fields abutting the railway station.  The Mayor was presented with the sod and a twig and retired to dinner at Mr Wilson’s house.

The laying of the first stone was on the 10th November 1862.  The corporation assembled at Stephen's Green at 11:30 am and proceeded to Stillorgan. The weather was appalling and tents which had been assembled at the site threatened to collapse.  The Lord Lieutenant gave a speech and was presented with a trowel, the blade was made of silver and engraved with a bard playing a harp and an Irish wolfhound, the handle of bog oak was carved with shamrock sprays.  It was proposed that the reservoir be called “The Prince of Wales Reservoir”.

By January 1863 there were over two hundred workers employed on the Stillorgan site and the contractor was looking for more men and by July of that year the perimeter wall was nearly completed.  It was announced that there were to be two reservoirs connected by pipes and valves each capable of storing 43 million gallons, and whereas they were to have been two valve houses it is thought to be more economical for running costs, to have just one.  Mr Parke Neville of Belmont Lodge, Murphystown Road, as the Sanitary engineer of the city was Chief engineer to the project.

Neville, was born in 1812, and he underwent training both as a civil engineer and an architect.  In 1851, he was appointed as the first full-time Dublin City Surveyor, to which post the new duties of City Engineer were added in 1857.  He held the office of President of the Institution of Civil Engineers and was also Vice-President of the Institute of Architects.  He served Dublin with distinction for 35 years and achieved many great things.  He  suffered poor health but continued to carry out his duties until two days before his death, which took place at his house in Pembroke Road on 30 October 1886.  In 1870 his salary was increased from £500 to £750 pa , he lived at South Hill Cottage, Blackrock from 1857 to 1862.

By August that year there was a strike at the site over pay as the contractor was paying ten shillings per week, accommodation was expensive in Stillorgan and workers had come from all over Ireland to work on the project.  On other sites run by the Scottish contractor, workers were getting fourteen shillings.  This took a number of weeks to settle.

Around this time, it is decided to supply Pembroke Township directly by way of one of the basins created rather that via a branch line.  An inspection in April 1864 reports that they expect completion by January 1866 at a cost of £280,000.   An update in June of this year reports that 4/5ths of the pipes have been delivered, that 12 miles of pipe has been laid and that the earthworks at Stillorgan are nearly complete.

October 1864 brings notice that disruption to the city is to be expected as great conduit pipes are to be laid in Great Brunswick Street (Pearse Street) and that the pipework from Stillorgan is now within a 100 yards of Leeson Street.  By August 1865 the scheme is fast approaching completion, some 17 ½ miles of pipework has been laid from the source to Stillorgan which will carry 2,400,000,000 gallons of water at any one time.

The scheme was an outstanding success although the final cost is rather fuzzy.   New lines were laid to supply water to Cabinteely, Dalkey, Kingstown, Killiney, Ballybrack and Bray which both added to the cost but also greatly contributed to the capital expense.   The pressure from the water was so great the day it was switched on that pipes burst in a number of places.
​
In 1876 there was public outrage to the loss of water to households when a pipe burst in Enniskerry valley.  Water was “a God given right” according to some interviewed, a sure sign that this wild, improbable scheme was finally accepted.

In the words of Leopold Bloom

'Did it  (the water) flow?
Yes. From Roundwood reservoir in County Wicklow of a cubic capacity of 2400 million gallons, percolating through a subterranean aqueduct of filter mains of single and double pipeage constructed at an initial plant cost of 5 pounds per linear yard by way of the Dargle, Rathdown, Glen of the Downs and Callowhill to the 26 acre reservoir at Stillorgan, a distance of 22 statute miles, and thence, through a system of relieving tanks, by a gradient of 250 feet to the city bound­ary at Eustace Bridge, Upper Leeson Street, though from prolonged summer drougth and daily supply of 12½ mil­lion gallons the water had fallen below the sill of the overflow weir for which reason the borough surveyor and waterworks engineer, Mr Spencer Harty, C. E., on the instructions of the waterworks committee had prohibited the use of municipal water for purposes other than those of consumption (envis­aging the possibility of recourse being had to the impotable water of the Grand and Royal canals as in 1893) particu­larly as the South Dublin Guardians, notwithstanding their ration of 15 gallons per day per pauper supplied through a 6 inch meter, had been convicted of a wastage of 20,000 gallons per night by a reading of their meter on the affirma­tion of the law agent of the corporation, Mr Ignatius Rice, solicitor, thereby acting to the detriment of another sec­tion of the public, selfsupporting taxpayers, solvent, sound.' 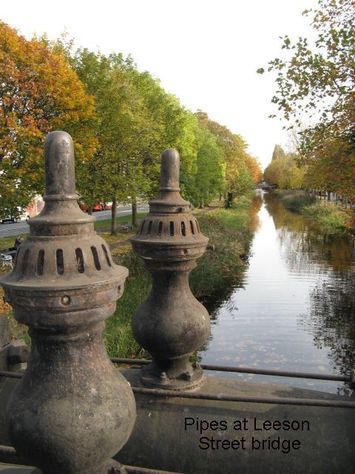