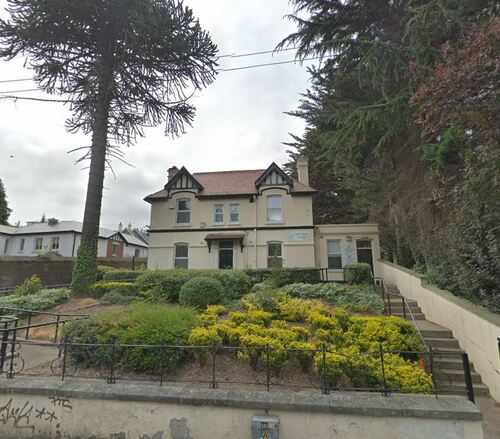 The original dispensary was in use from 1828 with Dr H C Field MD as the medical officer.
The caretaker of the dispensary was Charles Sargison, who was also the sexton of Stillorgan
Parish church.   He had been asked to leave by 1901 but had refused to move out.
Ellen Cooper, a niece of Charles Sargison was caretaker/cleaner from 1905 -1909.

In 1904 the dispensary had no accommodation and was noted to be scarcely more than a shed.
By 1907 there were proposals to build a new dispensary and caretaker’s residence.  This looks
to have been sited south of the old dispensary.  The architect was George Tighe Moore, Civil
Engineer.  He was architect and engineer to Rathdown Union Board of Guardians.  He was
the architect in charge of major works at the Portrane and Richmond lunatic asylums in 1908
and went on to build a housing scheme on the Coolgreaney Road at Arklow, Co. Wicklow in 1910.

The Rathdown Guardians originally applied for a loan of 700 pounds from the Local
Government Board to build the new dispensary but tenders came in between 800 and 1400.
The building was thought to be too fancy with a hall, waiting room, Registrars-room (for the
registering of births, deaths and marriages), a surgery and kitchen downstairs but what really
caused the outcry was the building was to have four bedrooms and a bathroom upstairs
which was thought to be too extravagant for a caretaker.  Miss Cooper lost her job when the
new dispensary was built, Mr O'Farrell, a sub sanitary and school inspector was given the job.
She requested payment in lieu of notice but this was denied.