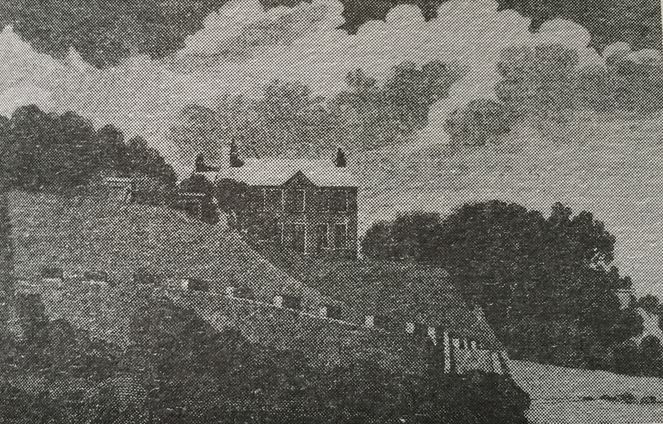 Vauxhall Gardens as depicted in The Sentimental and Masonic Magazine, August 1793.
Fort Lisle
also known as Vauxhall Gardens and Elm Cliff
​In 1750 Dublin brewer William Medcalf recognizing the potential of the newly emerging
development at the Black Rock leased a number of acres from Lord Viscount Fitzwilliam on
which he proposed to construct a series of marine villas. By 1762 two houses and three cabins
had been built all enjoying spectacular coastal views and access to the strand.  The two larger
properties, simple five bay two story structures occupied adjoining sites opposite the gated
entrance to Merrion Walk.

The leasehold interests in the first house to be sold was purchased by Arabella Denny in 1754
with the second property  acquired 3 years later by her cousin Mary Henry née Fitzmaurice and
her husband James. The Henrys and Lady Arabella planted elaborate gardens with a vast array
of trees and shrubs accessed by winding pathways. After only three years of residency James
Henry sold his interest to John Lysaght, Lord Baron Lisle of Mountnorth in County Cork and
the house became known as Fort Lisle.

The property remained in the possession of the Lysaght family until 1793 when Grace Travers
Lord Lisle’s daughter sold the house to hotelier Thomas Mayne.  Remodelled and renamed,
the Vauxhall Gardens Hotel and Tavern provided elegant accommodation ‘equal to any house
in Ireland or England’.  Musical entertainment and refreshments could be enjoyed by the
‘nobility and gentry’ subject to an admittance charge of one British sixpence.

Eleven years later the overriding political and economic climate had impacted the popularity
of the Black Rock and Fort Lisle was again on the market.  At some point prior to 1817 the
house was divided into two properties but it appears that this subdivision was not permanent
and varied in response to market demands.  OSI maps for the period 1837-42 depict two
properties, Fort Lisle and Elm Cliff both present on the site.

Between 1824 and 1826 amidst allegation of impropriety and a narrowly averted duel, Miss
Mary Malone operated a lodging house at Fort Lisle.  For a brief period in 1830 James
Predeville, scholar of the University of Dublin was headmaster of a Boarding and Day School
which offered a classical and general education with the added health benefits of the sea air.

On 17th December 1834 the first train travelled along the newly constructed railway line from
Westland Row to Kingstown.  Dublin Kingstown Railway Company acquired possession of
what was then referred to as Elm Cliff and a pathway was constructed providing access to the
station at Blackrock.  The Company advertised the property for rent with preference given to
persons proposing to operate it as a boarding or lodging establishment.  Mrs Maria Grace and
her daughters opened Elm Cliff Boarding House in 1836 and continued in business until 1865.

The lease was acquired in 1871 by the ‘Meath’ Protestant Industrial School for Boys and by
March 1874 it is recorded that 56 boys resided at the house under the care of master and
mistress Mr and Mrs Robert Wilson.  On expiry of the lease in May 1876 the school relocated
to a larger site nearby.

In 1879 in response to a proposal from the Blackrock Town Commissioners the Earl of
Pembroke granted the lease of Elm Cliff for 200 years at an annual rent of £30 for the purpose
of annexing it to the People’s Park.  By February 1880 the house had been demolished and the
salvaged material was auctioned on the site by Blackrock auctioneer John Hazley.

Number                   Described in 1804 as a ‘capital family residence’ it contained two breakfast rooms,
of Rooms                 two dining parlours, a forty foot drawing room, five bedchambers, a large store
room, kitchens, cellars, coaches and stables.  It was surrounded by one and a half
acres of pleasure gardens with a rivulet of fresh water and a secluded bathing place.
A smaller detached house was also located on the site.  An additional 10 acres on
Merrion Ave. was included as part of the demesne.