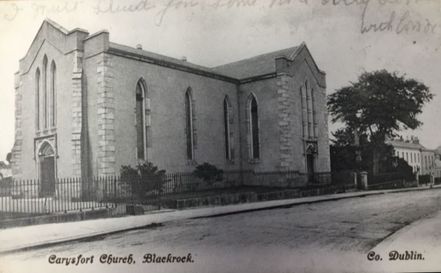 Christchurch was located on the corner of Carysfort Avenue and what is now the
Blackrock bypass.  Rev Thomas Kelly built the church with his own funds and opened it as a
"Dissenting Chapel"  in 1814.   This break away group from the Church of Ireland were known
as Kellyites.  In 1839 the Church was enlarged.  The Trust governing Christ Church was put
an end to 'for the time being' and it was vested in the Representative Church Body in 1892.

The Church closed in March 1960 despite a lengthy court case in which the parishioners tried
in vain to keep the church open, it was ​demolished circa 1961.

Part of the railings still survive, and the organ was transferred to the Sacred Heart Church,
​Donnybrook.  The marble pulpit and reading desk, erected in memory of Rev Rambaut were
gifted to the Church of Drumcar, Co Louth.