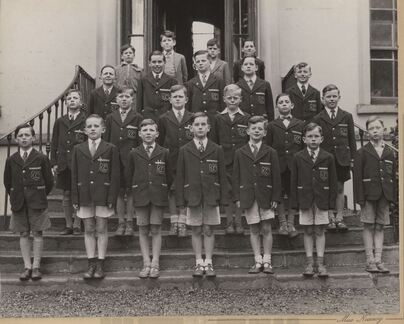 Photograph on steps is courtesy of Dominic Lee of Priory Studios and is circa 1952.   Judging by the width and number of steps, it would have been quite a substantial house.
Oatland/Oatlands

MAP LOCATION    OSI maps of 1838-1845 and 1898-1913 place it in the townland of Stillorgan
North and it is annotated as Oatland and Oatlands respectively.

GENERAL               "Land formerly held by Robert Emmet now in the possession of Thomas
Addis Emmet leased to William Fleming for 95 years (Total land 13A 1R 17.5P)" -   Deed dated
1799.   On Taylors map of 1816 it is shown as a small house called Oatland.   It was a five bay,
two storey over basement with an Ionic portico.  Typically Georgian with a central Wyatt window
above the porch.

Oatlands originally had two gatelodges, one is still extant and was for sale in 2015.  An Arts &
Crafts style lodge with tripartite oriel window and herringbone brick decorative panels.  The
house itself was described as having 5 bedrooms with a drawing room that led to a greenhouse
in 1823 but by 1904 it had seven bedrooms, four drawing rooms plus servants quarters.  In
1880 it was sold by the Landed Estate Court and purchased by Matthew Pollock, the tenant.  It
housed the telescope of John Ross.

The house and grounds were home to the Stillorgan fete in the 1950's.