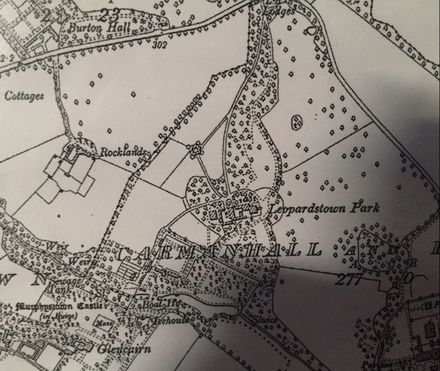 MAP LOCATION    OSI maps of 1838-1845 and 1898-1913 place it in the townland of Carmanhall and it is annotated as Rockland and Rocklands respectively.

GENERAL                 A substantial house built by Richard Burton.  The entrance was via a gate lodge on the Leopardstown Road opposite Burton Hall, the home of his brother Samuel.  The house was noted as adjoining Mr Cootes property (Charles Henry Coote, MP living at Leopardstown Park House).

The house was probably rebuilt in the early 1800's as in 1802 it was advertised for let as " The house is new and roomy, the gardens walled in and planted with the best fruit trees and cropped for the winter".  In 1819 it was advertised again for let as a demesne surrounded by an eight foot wall enclosed by iron gates with three gardens, separately enclosed by a 14 feet wall with green-house stoves, grapery and peach houses.  Captain Ellis was beaten up when the house was broken into in April 1817.

In 1861 the Landed Estates Courts ordered the selling of Carmans-hall which included Rocklands and Burton Hall.   John Henry Dunne went bankrupt in 1866 and the house was put on the market again.  In 1876 Edward Ellis Mayne is listed as the owner of Rocklands  -  He owned over 467 acres valued at 708 pounds and on 25 Jul 1882, a lease of Rocklands to William E Perrin is given.