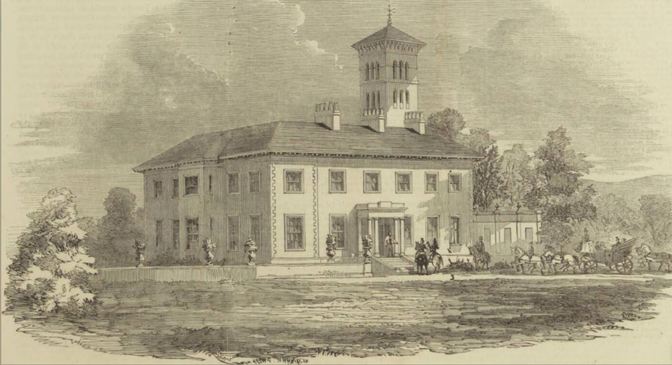 GENERAL                  A detached two storey six bay Georgian house with a Doric style porch approached by
seven granite cut steps.   It was extended and a Belvedere tower added circa 1855 which is thought to be
the work of John Skipton Mulvany.  By 1857, William Dargan used 'The Tower, Mount Anville' as his business
address as well as 74 Harcourt Street.   Queen Victoria visited Mr Dargan in 1853 and the visit was described
in the Illustrated London Newspaper in September 1853.  A Wellingtonia (Sequoia) tree growing outside the
main door of Mount Anville House was planted by her and in 1863 plants from Mount Anville were
transplanted to create the public gardens in Bray.

In 1865 Mount Anville was sold to Madame Julia Scully, the Superioress of the Convent of the Sacred Heart,
Glasnevin and sister to Vincent Scully QC, MP and a large wing was added to the design of George Ashlin.
In 1884 an Oratory was ​built in grounds commissioned by Ashlin's mother, Dorinda Ashlin.  It had two
gatelodges originally which were demolished circa 1851 when a new entrance gatelodge and avenue was
created off Mount Anville Road.  A garden fountain designed by Baird & Thompson which has been used at
the Great Exhibition and was installed at Mount Anville was not sold as part of the contents and was later sold
by the Order and installed at the Thomas Prior Hall in Ballsbridge (now the Clayton Hotel).