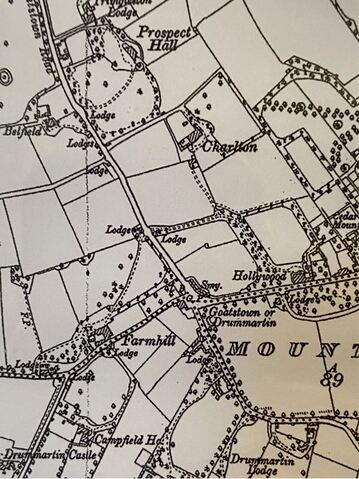 In 1818 it was on 11 acres with two gardens (one walled and lined with fruit trees).  It also had two lock-up
yards and was described as a modern house.
​
‘There is upon this holding a dwelling house two stories high consisting of a parlour, drawing room, three
bed chambers, kitchen, servants accommodation in the basement story, yard, stable, coach house, walled
garden and ornamental plantations.’ Brassington 1832.

In 1882 it was described as a handsome basement residence on 8 acres.  It had conservatories, two coach
houses, stables and a gatelodge (corner of Willowfield Avenue and Goatstown Road - no longer extant).  It
also had a long carriage drive, 6 family bedrooms and 4 servants rooms and the sewage was perfect as 9"
glazed pipes had been installed.  It is thought that the name was changed to Corca Duibhne between 1927
and 1937.