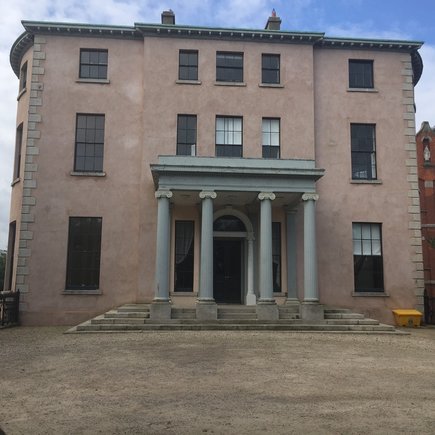 GENERAL                Built by John Allen, Dublin Merchant, Harcourt Street as a rental property.  The house
is a five bay, three storey over basement with bow ends.   The portico is a later addition and the columns
appear to be constructed of cast iron.  The house was the scene of a riot in 1832 when a wooden hospital
built to accommodate cholera patients was torn down on the instructions of William Saurin.  The hospital
was located on Yore's lane, of which Saurin owed the freehold, and connected Blackrock with
Stillorgan.   The estate was purchased by the Sisters of Mercy and a series of redbrick buildings and a
chapel were built on the site.  It was run as a industrial school for a short period before becoming a teacher
training college for women in 1903.  This is one of the colleges where Eamon De Valera taught mathematics.