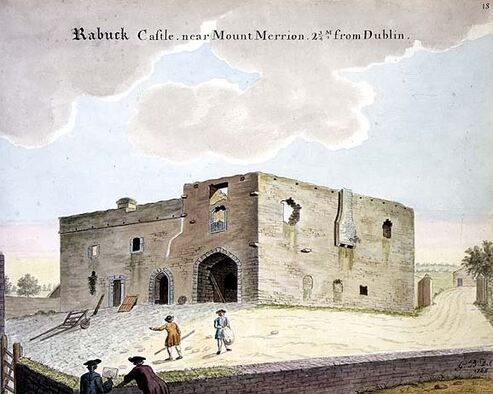 GENERAL                 This is a very early site with residents listed in the 11th century and at one
time had a moat.  The castle was described as ‘a capital mansion house built in the castellated
style consisting of a parlour, drawing room, library and breakfast room, with five bed
chambers and servants apartments.’ (Brassington 1832).  It was remodelled or rebuilt in 1788
for Thomas, Baron Trimlestown by Samuel Sproule.   It had a conservatory designed by
Richard Turner of the Hammersmith Iron Foundry in Dublin.  It also had an elaborated Fernery
which the Westby family commissioned.  This was built by Kennan's of Dublin to a design by
Moncur and MacKenzie.  The house was for sale on 67 acres in 1943, with two cottages, a gate
lodge and four granite cottages on the property.  It was sold in three lots for £16915.  The
household furniture sale in 1943 included a stag's head and four suits of armour.

Originally It was approached by an avenue of Rhododendron.  It's a Victorian creation with
gothic treble arched windows, treble arched bay and an abundance of elaborate stone
carving, hiding the much older castle.  The gatelodge also survives with the Westby coat of arms
and is a protected structure as are the 4 castle cottages.

ARCHITECT             Remodelled for James Crofton in the late 18th century by Samuel Sproule.