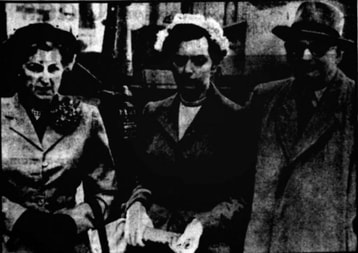 The Westby Family of Roebuck Castle

3          Francis Vandeleur Westby born 15 Jun 1859 at Roebuck Castle.  He was appointed a
member of the Royal Zoological Society in 1886.  He married Jannette Louisa (Louie)
Orme, second daughter of George Orme on 28 Jan 1888 at St Marylebone Parish Church
London.  Louie kept dachshunds and was a keen gardener.  With her gardener Fred
Simmons, she designed a sunken herb garden surrounded by peonies.  Both Louie and
Francis won numerous awards for flowers and shrubs and opened the garden regularly
for fetes in aid of the British Legion.  Francis died at Roebuck Castle on 19 Sep 1930 aged
71 and left 36K in personal estate.  He made several bequests to his staff, including £400
to his gardener Fred Simmons and £250 to his chauffeur Robert Coomber.  He was
buried at Deansgrange.  Louie died 27 May 1943 aged 77 at Roebuck Castle and was buried
at Deansgrange.

1               Percival St George Charles Westby born in Wales and baptised in 1888 at
Llangather, Carmarthenshire.  Killed in action at Ypres on 23 Sep 1917 aged 29
and was buried at Flanders.  He is remembered on the War Memorial in Taney
Church.
​
2              Horace William Turner Westby born 22 Dec 1891 at Gurthalougha, Co
Tipperary.  He  joined the Royal Fusiliers and undertook two tours (Egypt and
Palestine) and attained the rank of Captain.  He died 24 Aug 1926 and was buried
at Deansgrange.

Edward secondly married Susan Elizabeth Garde, eldest daughter of John Davis Garde of Mount
Dillon in Roebuck at Taney Church on 16 Jun 1864.  He was appointed JP for Dublin in 1863.  He was
a member of The Royal Agricultural Society and his Jersey herd won many awards.  He was also a
member of the Royal Horticultural Society and he took great pleasure in the gardens of Roebuck
Castle.  Together with his gardener Mr Bracken they won numerous awards at various flower shows.

Susan was a patron and visitor to the National Institution and Molyneux Asylum for the Blind of
Ireland based at Leeson Park.  She fund raised and took part in sales of work as both a stall holder
and judge.  Edward died 23 Apr 1893 at Roebuck Castle and Susan and son Francis put his Jersey
herd and his plant collection up for sale.  He left 27K in personal estate.  Susan died 25 Dec 1904
at Kensington Gore, Middlesex.