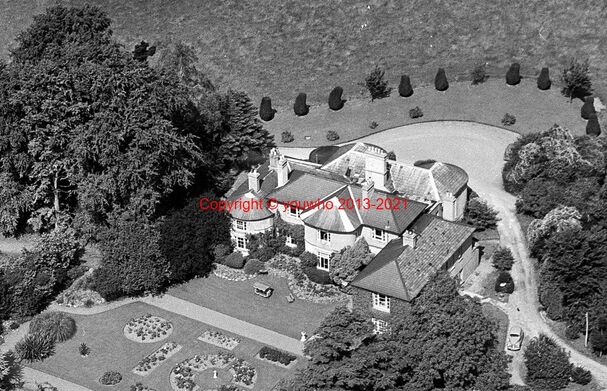 GENERAL                    Single-storey over basement Georgian villa and two storey to the rear.
Deceptively large, it has double bow projections to front and rear and original Wyatt windows.
The hood moulds above each window are like graceful eyebrows and the bow projections with
their conical slated roofs are most unusual.  The leasehold interest of Ferney on 19 acres was
advertised for sale as the property of George Howell deceased in 1845, with a yearly tenant
installed.  Howell held the lease from 1829.  The house at one time was home to the Howells and
the Colleys, also home to the Scovells who lost two of their children, tragically in the 1868
Abergele rail crash.  Rose Mary Anne Barton (1856 - 1929) sketched in the gardens of the house
in 1891.  The coach house and stables were destroyed in a fire in 1866.
​
The Darley family also lived here for over 50 years.  John Darley died aged just 47 and left his wife
Cherrie Lees to bring up 10 children aged between 3 and 15.  Set a good way back from the road,
its lodge was opposite that of The Grange, where another branch of the Darley family lived.  It
​was for sale in July 1935 on 17 acres with 800' of road frontage.  In 1937 the name of the house was
changed to Beech Park.

Ferney, later Setanta School/Beech Park House is landlocked in the middle of Beechwood
Court Estate.  It still retains many beautiful trees including some Monterey Cypress.  Planning has
been lodged to convert the house into apartments and build further ​housing in the grounds.  It is
on .7 acres and is not a protected structure.