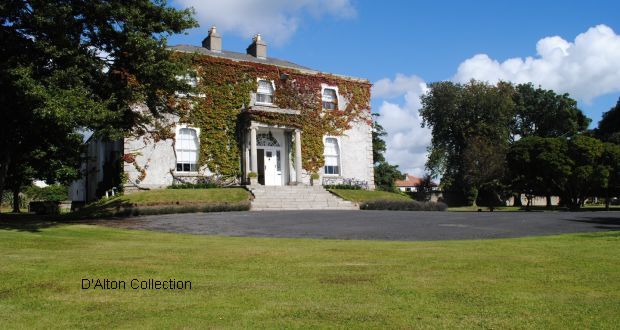 AREA LOCATION   STILLORGAN, entrance to the house is through Cherrygarth Estate on Trees Road, Mount Merrion.

GENERAL                 An ivy-clad Georgian plain 3-bay mansion, two storey over basement with Ionic portico, the fanlight may be Edwardian but the glass is pure Georgian, secreted away on a substantial site off Trees Road, it was the long-time family home of hotelier PV Doyle and his wife Margaret.  PV Doyle purchased the period house in 1960 when the house stood on 13 acres.  Originally it had two gate lodges - one on the lower Kilmacud Road (close to South Avenue and no longer extant) and one on the old Dublin Road which survives beside Oatlands College along with part of the old entrance avenue, sadly overgrown.

The house has gone though a number of unsympathetic additions in the 1900's and a lack of maintenance in the 21st century but a substantial amount of the original building survives including the stables.  The house still has its original granite quoins although the façade has been dashed.  Sash windows with original Georgian glass, Portland stone flagstones, curved door joinery and some of the ceilings also seem to be original to the house, as do two fireplaces and some over-door panelling.  Of major architectural significance to the area as the other large houses in Stillorgan North (Beaufield, Oatlands, The Priory and Mount Merrion House) have mostly been demolished.

Carysfort maps from 1860 show the house as being bordered on two sides by the Mount Merrion Demesne wall, whether these are the original or have been rebuilt would be pure speculation as the site is now private.  The land was held by Robert Emmet and then in 1799 was in the possession of Thomas Addis Emmet who leased it to William Fleming for 95 years.  Lease for 50 years from Earl of Carysfort of Glenart Co Wicklow to Thomas Talbot Power of Inverusk, Ballybrack, County Dublin for 50 years, included is 16 acres and two gate lodges.  In 1926 Sir Thomas Talbot Power of the Irish Distillers Group gifted Thornhill House to William Ryan.  In 1959 Veronica Ryan opened a school at the house.   The gate lodge on the Kilmacud Road was demolished in the  late 1960's early 70's and a new bungalow built in its place.
​
YEAR BUILT             circa 1799

ARCHITECT              Unknown, but has been attributed to a William Farrell, although it looks more
like a Richard Morrison design.

The Ryans of Thornhill, had a wonderful gardener in Mr Henry Harkins, who lived in an old gate lodge
with his family (his wife helped out in The Children's House school  well into the late '70's).  The gate
lodge was demolished by the Council under a CPO to allow for road-widening, and in its place was
built the small white bungalow that still exists next to the pedestrian entrance to Cherry Garth on the
Lr Kilmacud road.