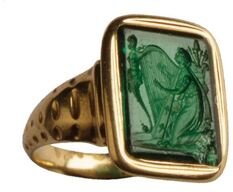 Dr Robert Emmets ring which can be seen at Collins Barrack museum - http://100objects.ie/robert-emmets-ring/
The Emmet Family of Stillorgan and Roebuck

Dr Robert Emmet married Elizabeth Mason and had at least 12 children of whom only four were
mentioned when he wrote his Will.  His practice was in Molesworth Street and the family moved to
St Stephen's Green in 1786.   Robert, State Physician, died at Casino, Milltown on 9 Dec 1802 and
was buried at St Peters on 12 Dec 1802.  His son Thomas was the executor of his Will with a codicil
which stated that in the event that Thomas Addis found this inconvenient to comply with, then his
son in law Robert Holmes was to be his executor.  The House in Milltown on 8 acres was put up for
sale by Robert Holmes and assigned to James Martin Pike of Limerick.

Eliza died in September 1803 at Bloomfield, Donnybrook and was buried as Emilia Emmet on
11 Sep 1803 at St Peters.  That her name was written in the register incorrectly could imply that
there was no family present or that the priest who conducted the funeral service was not familiar with
her.  Their resting place was described as a vault between the shrub inside the railings and the garden
seat on the left hand side close to the old watch house.

1          Christopher Temple Emmet born circa 1760 called to the bar in 1781 and married his cousin
Anne Western Shirley Temple of Stephens Green, daughter of Harriet  Shirley and Robert
Temple in September 1784 and they moved to 29 York Street.  Christopher died at York Street
and was buried at St Peters on 9 Mar 1788.

1             Catherine Emmet only surviving child was bequeathed 1500 by her grandfather
Robert Emmet.  She was living at Lower Swanwick near Bath in 1815 when she made
her Will and died unmarried in 1825, leaving her estate to her uncle Robert Homes,
her cousin Christopher Temple Emmet in New York and her cousin Elizabeth Holmes.
Her uncle Robert was her executor.

2          Thomas Addis Emmet born 24 Apr 1774 in Cork City.  He qualified as a physician in Edinburgh
but abandoned his medical career to study Law.  He was called to the bar and practised on
the Munster circuit and joined the United Irishmen in 1795.   He was elected secretary of their
executive body in 1797 by which time the organisation had been declared illegal.  He married
Jane Patten, a sister of John Patten.  He was arrested in 1798 and imprisoned at Kilmainham Jail,
and soon after was transported to Fort George, in Scotland.  Upon his release in 1802, he
travelled to Brussels, where he was visited by his brother Robert.  On hearing of the failed
rebellion in 1803 and the execution of his brother he fled to America.  His brother in law, John
Patten was also arrested in 1803 and not released until 1806.  Thomas joined the New York Bar
and set up his own successful law practice, he died 14 Nov 1827 while conducting a court case.

3          Mary Ann Emmet married Robert Holmes.  Robert was a councillor and they lived at St Stephen's
Green and at Milltown with the Emmets.  He was a barrister called to the bar in 1795 and was
arrested by Town Major Sirr on the 23 Jul 1803 and confined to the tower at Dublin Castle.   Mary
Ann died in 1804 while he was still detained and was probably buried quietly with her parents.
On release from prison in 1806, Robert moved to Hardwicke Street and then to Gardiner Street in
1816.  Robert died in Dec 1859 at 7 Eaton Place, Belgrave Square aged 95 at the residence of his
son in law.

4          Robert Emmet born 4 Mar 1778 at 110 St Stephen Green (adjacent to the RSCI on the corner of
Glover lane) baptised at St Peter's Church 10 Mar 1778.  He visited his brother Thomas in Brussels
in 1802 returning to Dublin in October that year.  He was left 2500 plus a residuary in his father's
Will which was thought to have been spent on arms.  He was involved in the unsuccessful rebellion
of July 1803, was arrested on 25 Aug 1803 at Harold's Cross, brought to Kilmainham, then taken to
Dublin Castle on 30 Aug 1803.  He was tried and found guilty of High Treason and was executed
(hanged and his head chopped off) on 23 Sep 1803 at Newgate Prison (Green Street) and his
remains were returned to Kilmainham to await reclamation.  If not collected his remains were to
be interred in Bully's acre.  As the majority of his friends and family were in prison it is thought that
he was buried in Bully's acre and re-interred at a later date.  The most probable site for this burial
was St Peter's in Aungier Street where his brother Christopher and parents were buried and he
was possibly re-interred at the same time as his sister Mary Ann was buried in 1804.

In 1903 Thomas Addis Emmet's grandson, Dr Thomas D Emmet travelled, with his son Robert
from New York to Ireland in search of his great uncles last resting place.  Dr Emmet had searched
previously in 1880 but now with the help of Francis Joseph Bigger, the editor of the Ulster
Archaeological Journal of Belfast and  James Franklin Fuller, Architect of the Representative Church
Body, permission was granted by the Archbishop, Rev Dr Peacocke to excavate the graveyard at
St Peter's.  The work was supervised by Rev Mahaffy, rector of St Peters and his curate Rev Robinson.
David Quaid, a solicitor who had written a book on the subject of Robert Emmet's final birth and
burial was also in attendance.  The search area concentrated on the south east corner of the
graveyard, a number of trenches were dug but a positive result was not obtained.  In 1905 the
headstone of Christopher Temple Emmet and a Catherine Emmet was unearthed. (See photo NLI)

The remains of those interred at St Peters have been scattered all over the city.  The 1980/1
exhumations were carried out with the use of a mechanical excavator and over a period of five
months 1200 burials were removed from the site and re-interred at St Luke's Crypt.

Following the discovery of in-situ burials on the site in 2002 and the potential for underlying
medieval archaeology, excavation became necessary again which was undertaken by
Archaeologist Ruth Elliott.   An expensive coffin (burial 055) containing the body of an adult female
was uncovered and a possibility exists that this was the burial of Elizabeth Emmet nee Mason.

The YMCA, owner of the site have planned for human remains from the 2003 excavation to be
re-interred at Mount St Jerome's cemetery, where they intended to purchase a burial plot and
erect a headstone. Todate (Feb 2015) this has not happened.  The headstones were stored as a
temporary measure at the YMCA sports grounds in Sandymount but have since disappeared.