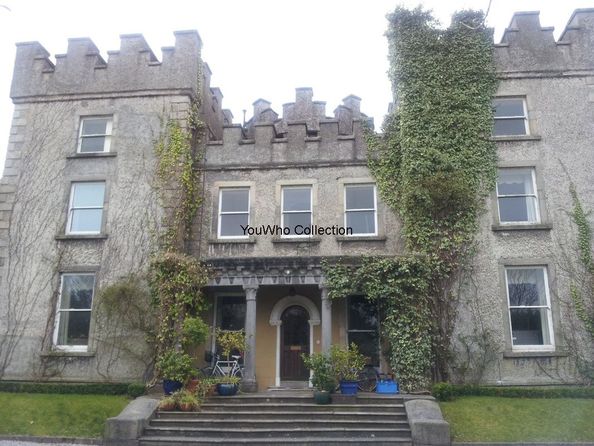 GENERAL                   ‘There is on this estate a capital mansion house built in the castellated style consisting
of parlour, drawing room, three minor reception rooms, five bed chambers, and
basement story containing kitchen and servants apartments, an extensive walled
garden, stabling for six horses, coach house and ornamental plantations.  Along with
the house is ‘a small dwelling house, extensive Iron Works consisting of several forges
and ware house with an extensive well-constructed and costly Mill Pond the whole
was erected by Mr Jackson whose interest William M'Caskey purchased ’
(Brassington 1832).

The Great Iron mills manufactured brasswork, fenders, cutlery and kitchen
furniture.  It was powered by two powerful waterwheels that were twelve
feet in diameter.  William M'Caskey purchased them in 1808 and they were put up
for sale by his brother Thomas in 1841.

The name Clonskeagh comes from the Irish Cluain Sceach - the meadow of the
white thorns.  The house is a detached three storey with 'a tower' at each corner
of the front and a set back Victorian style porch with limestone columns
approached by a flight of six steps.  Three bay between towers above the Doric porch.
It  originally had three gatelodges (main gate, west gate and inner gate) and was
approached via a long carriage drive from the Clonskeagh Road by way of twin
gatelodges and a castellated archway.  It  was sold separate to the mill in 1809 on
25 acres.  There was also another building on the plot called Thompson's tower which
may have been a folly.  According to Nathaniel Whittock (1846) the house was built in
the eighteenth century by Henry Jackson who was descended from General Andrew
Jackson, President of the United States, but yet to be proven.  The arrest warrant for
Oliver bond in 1793 is thought to have executed here.  During the tenure of Wade
Thompson, the grounds of the castle were used for the annual Inspection of The
​                                    Boys' Brigade, Dublin Battalion.

In 1972 The Tralee Charter, which allowed Tralee to become an official borough in
1612 was found at Clonskeagh Castle.   The charter had been missing from Tralee
since the borough council was abolished in 1840.  The charter was found in an
envelope addressed to A Rowan, Tralee, Co Kerry.  This likely connection is Anne
Margaret Rowan from Tralee, the cousin of Captain Wade Thompson, who died aged
81 on 13 Dec 1913,  on a visit to the castle.  Born 21 Nov 1832, she was the daughter
of the Ven Archdeacon Rowan, Archdeacon of Ardfert, an acclaimed antiquarian and
local historian.  Anne was an ardent unionist and a prominent speaker at Anti-Home
Rule meetings.  As a younger woman she was a novelist and also wrote several books
on Ireland.  She was an antiquarian and in the 1890's wrote a column for 'The Kerry
Post'  on local history but was frequently taken to task by way of letters to the editor by
Mary Agnes Hickson, antiquarian and author of the 'Kerry Records', for her 'lack of
sound research an mis-interpretation of old manuscripts'.