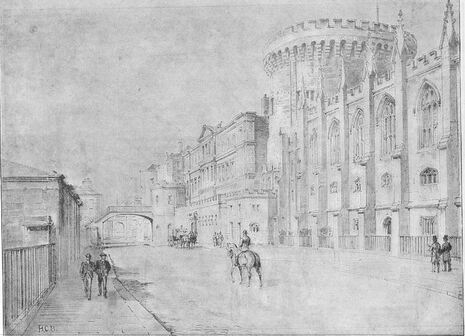 1          David Thompson born circa 1799 a JP for Dublin was vice chairman of The
Marine Salts Company of Ireland.  This was a company based at Long Walk in
Galway which processed seaweed from the Arran Islands to produce Iodine.
David died without issue on 23 Feb 1875 aged 76 leaving just under 50K in
​            personal estate.

2          Thomas Higgenbotham Thompson born circa 1808 was a  JP for Galway and
Dublin married Martha (Patty) Wallace, only daughter of Thomas Wallace
6 Feb 1836 at Taney Church.  Thomas was chairman of the Dublin Protestant
Association  and a director of The Marine Salts Company and a land agent to
many estates including the Croker family of Limerick and Cork and the Digby
family of Landenstown who held most of the Arran Islands.  He had offices at
95 Leeson Street.  He died 27 May 1886 at Clonskeagh Castle aged 78.  Martha
died 30 Oct 1900 at 23 Dartmouth Square and was buried at Mount Jerome.

5         Anne Mary Thompson married David  Peter Thompson, son of Peter Thompson
at Taney Church on 2 Dec 1828 and moved to Ballintaggart House, Co Kerry.
David was agent to Lord Ventry and died of gastric fever on 7 Jan 1845 aged 42 at
Clonskeagh Castle.  At the time he was visiting his uncle, who was also his father
in law at with the family for Christmas.  He left a wife and 5 young children.

George secondly married Catherine Alexander, only daughter of Major General Robert
Alexander of Derry, and granddaughter of the late Sir Robert Waller of New Park, County
Tipperary on 29 Aug 1838 at Aghadowy Church in Londonderry.  No issue was found.