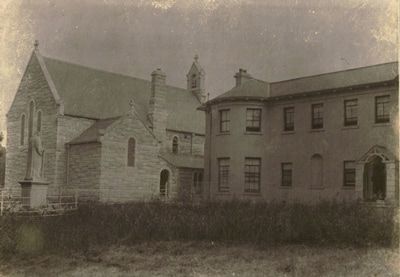 GENERAL                 The Carmelite Convent previously known as Parson’s Green dates from c1753.  It
was a Regency style rendered two storey rather plain house with four bays between two curved bow
projections.  The site contains a small burial ground for the Sisters with a statue depicting the Pietà
​donated by Elizabeth, the sister of Sir Thomas Farrell, sculptor.

In a letter to “Notes & Queries” William White, Oxford University Press, 1861, William Fitzpatrick
asks the public have they any information as to "whether Philippe Egalité, Duc of Orlénes spent any
of his exile in Ireland?"  He explains that the previous owners of the house, the Magee’s were under
the impression that he had lived at Parson’s Green.  Pamela Sims, who was married to Lord Edward
Fitzgerald of Frescati House was rumoured to be the illegitimate daughter of same Philippe Egalité.

When the house was put up for sale in March 1793 it was described as being in good order with
two enclosed walled gardens and a lawn surrounded with shrubbery.