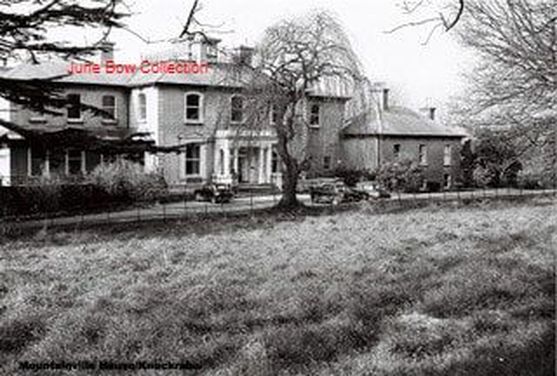 The house was built by Henry Minchin and had two gate lodges.  It was remodelled by W & T K
Louch in 1872.  The west gate lodge, gates and piers are protected structures, but they have
been altered since 1968 with a side entrance being blocked up and the gate lamps have been
changed from globes to lanterns.  Two storey over basement, to the rear it had a bow projection
and cast iron veranda with a protective awning at first floor level.  A long avenue and granite
steps led to a four pillar iconic porch.  In 1898 a portrait of Mary of Moderna by Sir Peter Lely
hung in the entrance hall and the drawing rooms had Carrara marble mantlepieces.  Christopher
Palles' study or 'den' as he preferred to call it was decorated with Turkish carpets and big divan
chairs.  It had a Galway marble chimney piece.  His law books were kept at 28 Fitzwilliam Place
so the shelves held his collection of literature and first editions including John Henry Newman's
Apologia. The gardens on 25 acres were his passion, there were hot houses, forcing houses and
ferneries.  They also contained rockeries and a miniature waterfall.  It was irrigated by a series
of underground pipes.  With the help of three gardeners, he grew palms, India Rubber trees and
orange trees.  The majority of plants were grown from seed or cuttings.