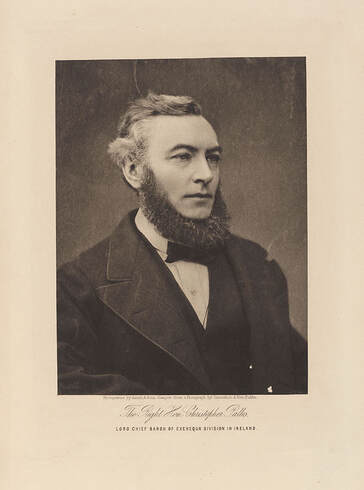 Andrew Christopher Palles of Little Mount Palles, county Cavan, son of late Andrew Palles
and Elizabeth O'Ferrall of Grouse Hall, Cavan married Eleanor Plunkett eldest daughter of
Mathew James Plunkett, a banker of St Margarets, Co Dublin.  Andrew was a solicitor but
was struck off the rolls for allegedly forging a deed.  He was reinstated in 1847 after the
allegation was found to be false.  They lived at Summer Hill in Dublin before moving to
Belvidere Place.  His Will dated 22 May 1877 left his estate to his eldest son and it also
​contained the following personal bequests.

1              Andrew Christopher Palles eldest son baptised at the Pro Cathedral Dublin on
25 May 1829.  He was educated at Clongowes and graduated Trinity BA in 1851.
He married Jane Hawke nee Bruce circa 1860.  He was a civil engineer and worked
in the Bombay Civil Service on tramways, he is credited with the design of the
Birkenhead Street Railway.  He was engaged on water, sewerage and irrigation
works in Canada, America, India and Ireland.  In 1867 he was working on the
​                sewage scheme in Kingstown.  He was a JP and later served as registrar to his brother,
the Chief Baron and worked on the Omagh water scheme.  His stepdaughter Jessie
Hawke married Joseph Fitzpatrick at Blackrock on 14 Jul 1868.  He died 23 Jan 1900
at 72 Leeson Street and was buried at Glasnevin.  Jane died at Upper Pembroke
Street on 17 Feb 1901 aged 72.

1          Eleanor Bruce Palles born 26 Feb 1861 at Liverpool married Joseph Dallas
Pratt at Christchurch Cathedral on 4 Jan 1888.  They had four children of
whom 2 survived until 1911 and they lived at Fitzwilliam.  Joseph a doctor
died in 1918 and Eleanor moved to England.  She died 31 Aug 1932 and
left personal estate of 15K to the Bishop of Southwark.

2          Elizabeth Palles born 26 Nov 1862 at Mounjoy Square lived with her uncle at
Mountanville after the death of her aunt Ellen and took care of her cousin
Christopher.  She also acted accompanied her uncle to functions and on his
travels abroad including America and Canada.  She was one of the first women
appointed magistrates for Co Dublin, together with Lady (Emily) Arnott, Lady
Redmond and Lady (Margaret) Dockrell in 1920.  Elizabeth died 22 Jan 1925
aged 61 years at St Grellans, Monkstown.  She left personal estate of 39K which
she states had been left in trust to her by her uncle to ensure Christopher junior
was well looked after.  She in turn left her estate to her nephew and nieces with
the same proviso.

3          Andrew Christopher Palles born 14 Sep 1864 at Sydney Avenue, Blackrock.
He joined Kitchener's Horse and was killed in action at Paardeburgh, South
Africa on 18 Feb 1900, although his death was not confirmed until August 1900.
He is remembered at Grand Parade, Statue CTV, Cape Town.  He married
twice and had three children.

2              Christopher Palles, second son born 25 Dec 1831 was educated at Clongowes and the
University of Dublin and was called to the Irish Bar in 1853.  He married Ellen Doyle,
only daughter of late Denis Doyle on 5 Aug 1862 in the Roman Catholic Church at
Clonsilla.  He took silk in 1865.  In 1874 he was appointed to the bench, becoming
Lord Chief Baron of the Exchequer and was considered the greatest Irish judge of his
age.  They lived at Mountjoy Square before surrendering the lease in 1877 and moved
to 28 Fitzwilliam Place (now Hamilton House).  Ellen, a talented artist died on
22 Jun 1885 aged 46 years at Thorncliff, Rathgar.  She was buried in Glasnevin and her
memorial is a beautiful sculpture in white marble by Sir Thomas Farrell.  After Ellen’s
death, Christopher’s niece, Elizabeth the daughter of his brother Andrew moved to
Mountainville to take care of Christopher junior who needed constant care.  In 1887
Christopher presented a valuable service of plate to the church at Kilmacud and
erected a memorial window to his wife.  In 1888 he donated £100 to the help clear
the debts of that church.

Christopher was one of the founding Commissioners of the National University of
Ireland and presented an annual medal to the best mathematical student at
Clongowes which his niece carried on presenting after his death.  In 1897 he heard
the much publicised case of French v West Clare Railway Co.  This was the Company's
unsuccessful appeal against an award of damages to the songwriter Percy French
who sued for loss of earnings after his train arrived at Kilkee more than four hours
late, causing him to miss a performance and suffer a loss of earnings.  This is
remembered in French's song ‘Are Ye Right There Michael, are ye right’ which derided
the railway company's punctuality and proficiency.  With the help of his niece,
Christopher organised a Christmas fete each year for the children of Dundrum,
Mount Anville and Stillorgan Schools.  Upwards of 200 children attended these parties
and each was presented with confectionery, a book and a toy.  Christopher gets a
brief mention in Joyce's Ulysses.

In 1912 Christopher had arranged to take a short trip on the maiden voyage of the
Titanic as a guest of the White Star Line but fortunately for him he contracted a cold
and was advised not to travel.  He retired in 1916 and died on 14 Feb 1920 aged 89
years at Mountain Ville House and was buried in the O’Connell Circle at Glasnevin.
He left 59K in personal estate, most of it was left to his niece Elizabeth in trust to care
​                for his son.

1            Christopher Palles born 27 April 1863 at Mountjoy Square, Dublin.  He was
classed as an imbecile but he was a much-loved child and probably just
had Down Syndrome.  His cousin Elizabeth looked after him until her death in
1925.  Christopher died at Highlands Ticehurst, a private mental hospital in
Sussex on 4 Jan 1953.