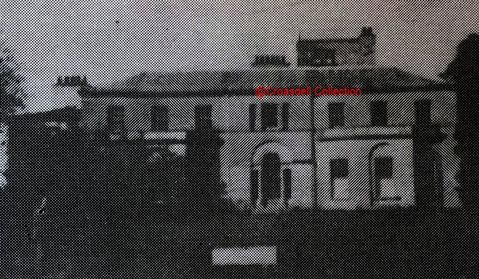 AREA LOCATION      STILLORGAN, Its main entrance was located south off the entrance of
St Helen's (Radisson) on what is now the N11.

GENERAL                This is a possible image of Sans Souci.  The house had two fronts, extensive
stabling, coach houses, a lock up yard and a observatory tower. Three storey, seven bay over
basement residence.  In 1781 Peter La Touche was letting it on 30 acres, the lease was held
from Lord Fitzwilliam which had 58 years unexpired. Over 60 outhouses were reported on the
1911 census.  The house was approached by gates that now form the entrance to St Helens. In
1836 the house was 'For sale' on 35 acres, fully furnished enclosed by high walls following the
death of Robert Roe, a Dublin merchant who had declined many offers of being a representative
of Dublin in parliament but remained as honorary treasurer of the Chamber of Council of Dublin.

Sans Souci (from the French without worry/carefree) had a second entrance and gatelodge on
Booterstown Avenue created after Cross Avenue was built.  During the hurricane of 1839 many
of the ancient elm trees at Sans Souci were uprooted.  These were part of the garden designed
by the landscape gardener Gabriel Griffin in 1769.  It was the site of the shooting of Kevin
O'Higgins who was found lying by a 'lamppost outside the gates of the house Sans Souci, which
directly faces up Cross Avenue'.