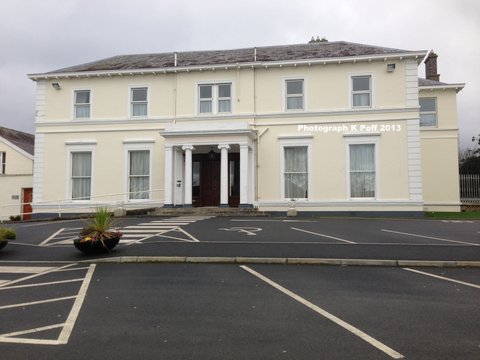 AREA LOCATION   STILLORGAN, Kilmacud Road Upper on the section that runs from the Kilmacud
Road Lower to the junction at Stillorgan Heath.

GENERAL                 An eighteenth Century house, two storey five bay with a cut stone ionic portico.
The house had a Pilkington heraldic window which has since been altered.  Some internal original
features in the dining room and ballroom are still in existence (2016).  The 'Chinese stove' pillars
entrance screen and railings which served both Clonmore and Westbury now serve as the entrance
to Stillorgan Wood housing estate.  There were two gate lodges which are no longer extant.  It would
have been one of the most imposing houses in the area, east facing with panoramic views of Dublin
bay.  It may have had a tower at some point, which the Pilkingtons (ship owners) used as an eagle's
​nest to watch out for their ships coming into port.  This was possibly the Demesne of Kilmacud on
45 acres.

In 1931 it became a home for the children of unmarried mothers.  County homes could send children
at a cosy of 12s 6d weekly.