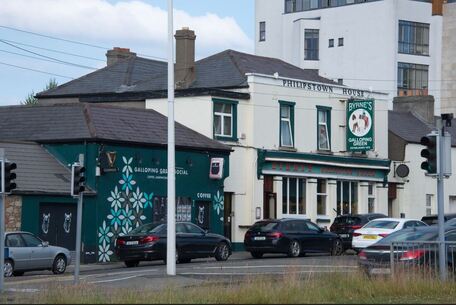 Galloping Green made up of 376 acres, 1 rood, 22 perches is a townland of Stillorgan and is split into North and South divided by the N11 (Bray Road) and bordered by the following townlands: Carmanhall and Leopardstown to the south, Deansgrange, Newpark and Foxrock to the east, Stillorgan Park and Stillorgan South to the north and Tipperstown and Waltersland to the west.

Laughanstown, 4 miles to the south, was used as a garrison camp and housed up to 4k men.  In 1795 troops were billeted there in case the French invaded at Killiney.  They exercised on Galloping green in 1796 with the Dublin Garrison.  In 1787 it was reported that Donnybrook fair would move to Galloping Green, this was strongly refuted at the time and the fair continued at Donnybrook.  By 1799 the troops had left Leahaunstown, the area was sparsely inhabited and was mainly under meadow and furze.  It had the main route from the GPO to Bray running through the townland and was easy pickings for banditti and footpads.  Merchants and travellers were targeted, and the mail bags were stolen by two armed robbers in 1802.  John Foy was later executed for his role in this.  The area was also used by the United Harrier Club and a bag fox would be enlarged (set free) at 10 am in the morning to provide a day's hunting for the local gentry.

in 1858 plots of land were advertised for sale by the Bentley brothers and in 1859 part of these lands were sold by the Deanery to brothers William Wellington Bentley and John Bentley to build the Foxrock estate.

'Part of the lands of GRANGE otherwise Dean's Grange, otherwise the Grange of Clonkeen of Galloping Green South; part of the MENSAL LANDS belonging to the Deanery of Christ Church also known as part of the Lands of FOXROCK and part of the lands called KEATING'S LANDS alias Kilteragh now called Kerrymount, near Carrickmines.'

In 1889 there were 67 lots on the above land were put up for auction by the owners - The Very Reverend John Sullivan and the Right Reverend James Alcock.  Some 355 acres known as the Foxrock Estate comprising the entire land of Kerrymount, Deansgrange or Galloping Green, the mensal lands of Foxrock, together with part of the lands of Tipperstown or Silverpark which were all held in fee simple were sold.

On the composite Cassini map Belmont Row appears to be erroneously annotated as Ball Alley, perhaps confused with a Philipstown House in Drogheda where a Ball Alley was built in 1919?  This name has crept into local history through various planning and archaeology reports on the area, who refer to the name of Belmont Row being changed but we have found no evidence of that change.

As a small village it would have had a public house and Byrnes have held the current pub since 1879.  In the early part of the century, it was known as Green House and Philipstown House from circa 1912.  The appellation 'Philipstown House' is unknown perhaps a nod to the original owner Philip Byrne or to the Montgomery family from Philipstown in Co Offaly who lived at 2 Belmont Row in the early 20th century?  Prior to Byrnes, there was a public house known as 'The Cat and Bagpipes', the proprietor was a Mr Toole in 1807, who had been there for a number of years, followed by Jane Townsend who ran a public house there until 1817.  James Fitzharris ran the public house until he died in 1852, and was buried at Stillorgan graveyard.  His widow Mary carried on the trade until at least 1868.