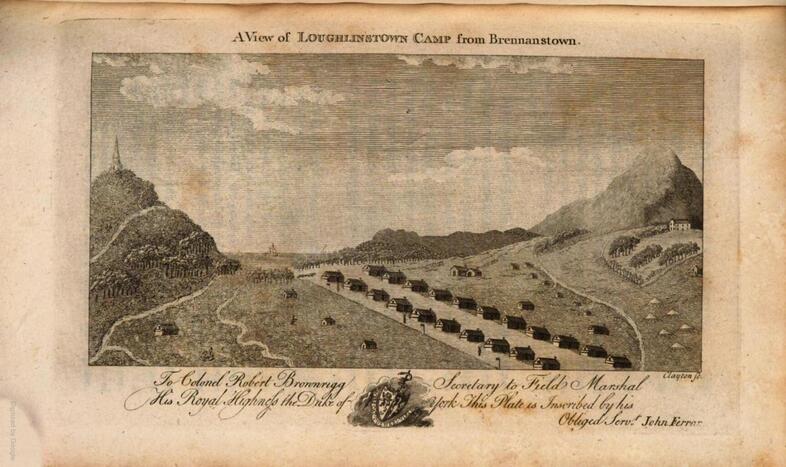 Image from John Ferrar, A View of Ancient and Modern Dublin, with Its Improvements to the Year 1796
Lehaunstown
​
Lehaunstown is located south of Carrickmines and west of Loughlinstown and is bounded to the north by Brennanstown, to the west by Carrick-mines great, to the south by Ticknick and Rathmichael and to the east by Glebe, Cherrywood and Loughlinstown.

Laughanstown was granted to Christchurch Cathedral in the eleventh century by Sigraghre, son of Thorkyll, a Hiberno-Norse noble (Simms 1983).  It was a little disturbed ancient landscape until the building of the M50 motorway which sounded the first deathknell.  However when the planning authority designated Cherrywood a Strategic Development Zone in 2010 designed to house around 25,000 residents, its fate was sealed.

The ancient name of Tully Church was tulach na n-Epscop, ‘the hill of the bishops’, and was in the ancient kingdom of Uí Briuin Chualann.
'Eight bishops came to Brigit out of Húi Briuin Cualann, from Telach na n-epscop to Loch Lemnachta beside Kildare.  Brigit asked her cook, Bláthnait, whether she had food for the bishops.  Brigit was ashamed, so the angel told her to milk the cows again.  The cows were milked and they filled the tubs', (Lewis-Crosby 1932).  This Celtic Monastic Church was built in the 5th/6th Century, the ring cross dates to the 10th century and the Bishop's cross dates to the 12th century.

​The list of garrisons in the Marquis of Ormonde’s regiment in August of 1642 included Lehaunstown and Kilgobbin castles, which were under the command of Colonel Monck.  After the rebellion was eventually extinguished by Cromwell in 1649, most of these castles were confiscated by the British government because of the owner’s involvement in the rebellion. Despite all this conflict, at the time of the restoration a good thatched castle was recorded to have stood in Laughanstown and was occupied by Edward Buller (On the Borders of the Pale, Goodbody 1993, page 35).  This thatched tower house was the residence of Edward Buller who died on 1 Apr 1691 and was buried at Stillorgan Parish graveyard.

A camp was established at Lehaunstown in 1795 to defend Killiney Bay or Dublin City in fear of a Napoleonic seaward invasion, it was one of four set up around Ireland.  The camp was to the east of Tully (Old Tulla) Church on 120 acre site which Barry Lawless leased from Anna Maria Domvile on the site of Lehaunstown Castle (now Lehaunstown Park).  An elevation on the site known as Drumgun Hill was where King James II and the remnant of his army encamped after their defeat at the Battle of the Boyne in 1690.  This created a flurry of activity in the housing market, vast numbers of houses were offered for rent or lease to accommodate the families of officers at the camp, each vying for business by extolling their proximity to the camp.

The camp was only to last for the summer and was served by tents and was initially set up with 10 canons and was served by a number of regiments including the Breadalbane and Argyllshire fencibles and it is recorded that 4000 men at one time were on site including the Donegal Militia and the Royal Irish Artillery (Ferrar, 1796.)  As the duration of the camp was extended, wooden huts were erected, often referred to as wooden tents or booths each to house two non commissioned officers and 36 men.  These were each fitted with an iron stove for cooking and heating and were also used as mess houses and kitchens.  Given that there were 125 of these wooden structures in 1796 and although some of them were for women, it seems likely that 4000 men could be accommodated.  A miniature replica of the camp was created and went on view at Dublin Castle Garden in late 1795.

The troops were visited by the then Lord Lieutenant John Jeffreys Pratt, 2nd Earl of Camden in August 1795 and was treated to an orchestrated sham battle.  After the battle the troops assembled into lines and were reviewed by the Lord Lieutenant, followed by commanders, generals, aide the camps and numerous ladies in carriages.  An assembly room was built on site measuring 60' x 24' with a drawing room at either end.  It was opened with a superb ball and supper attended by all the fashionable people of the area. The patronesses were Her Grace the Duchess of Leinster, Rt Hon countess of Moira, Rt Hon Countess of Leitrim, Viscountess Conyngham, Hon Mrs Needham and Mrs Crosbie.  There was also a coffee room supplied with Irish and foreign newspapers which served public breakfasts and was frequented by the Countess of Granard and Mrs Egerton.

The road to the camp via Galloping Green would have been very busy as military equipage and all goods, bar water, had to be carted in.  Contracts were handled by the Commissary General's office at Castle Street and included the supply of hay, straw, candles, beef and Whitehaven coal.  The camp also attracted thousands of sightseers to watch the displays, it had a market each Monday and tradesmen such as tailors and silversmiths were regular visitors.  There would also have been camp followers or sutlers who supplied coffee, liquor and beer.  Another mock battle was enacted in 1797 which was followed by a ball and a fireworks display to celebrate the Prince of Wales birthday. The camps hosted a great many balls and suppers but not all activities were as pleasant.  During the rebellion of 1798, suspects were taken there to confess and be lashed.  This is the camp that the Shears brothers were accused of concerting plans to seize, for which they hanged together at Newgate Prison.  In September 1798 it was announced that the camp at Lehaunstown was to be broken up and by April 1799 the troops had departed leaving a guard of 300 of the military stationed nearby.

In 1810 these lands were for rent again by Barry Lawless, although still annotated as Camp Ground on Taylors map of 1812, and were returned to pastureland.  In later years the land was farmed by the Grehan and O'Brien families.  Lehaunstown Park is a large dwelling, part of which is single storey with a considerable portion built to the second level. There were barns, sheds, gardens and outhouses set around an adjacent spacious courtyard and comprised in part, the old tower house.  An excavation of the site found badges, musket shot, buttons bearing the insignia of the Louth Militia and of Scottish regiments, coins of George III, commercial tokens from the Associated Irish Mines Company of Kyan and Camac and gun flints (Seaver, 2004).  Earlier excavations, which produced flint artefacts and potshards, had already determined that the site had a presence since the Neolithic (4000–2400 BC) period.

In 2021 Lehaunstown Park on 4 acres was bought by the Harvey family, owners of Windy Ridge Nurseries and will be developed as a nursery and Café. 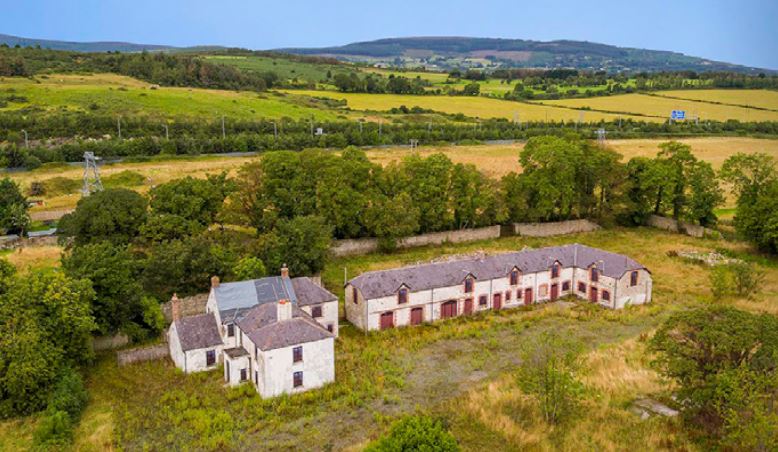 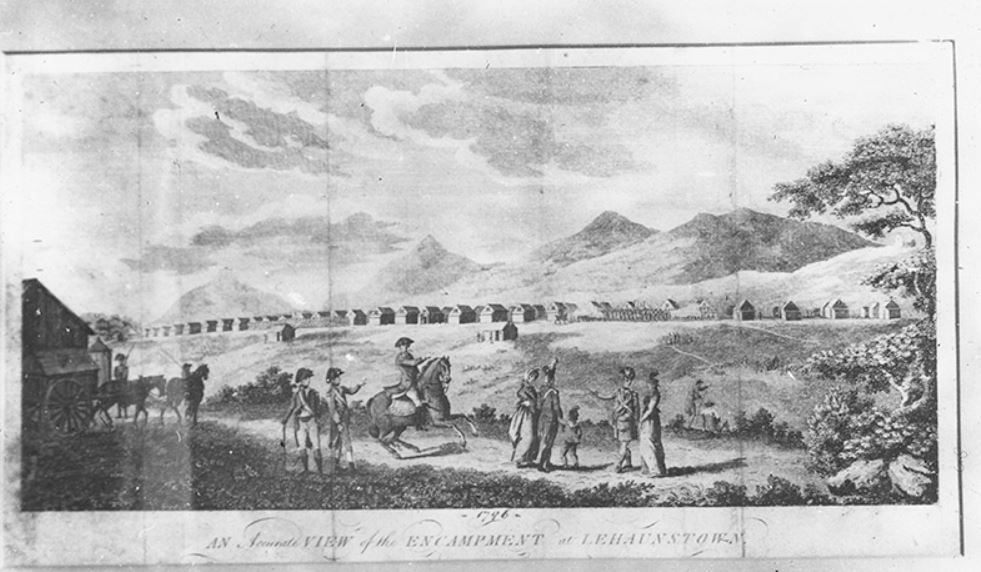 View of Encampment 1796 which went on view in the Little Museum on Mary Street.