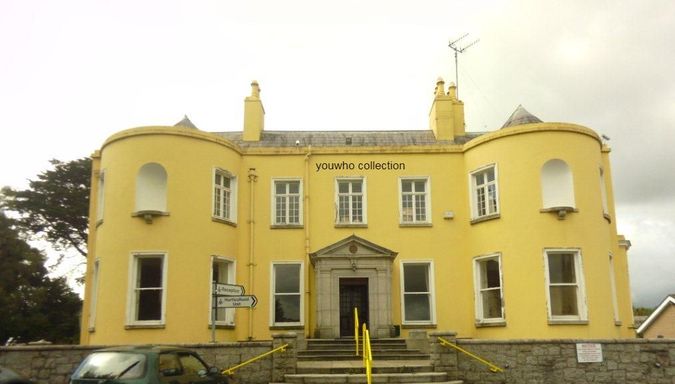 GENERAL                    Burton Hall was built for Samuel Burton circa 1730 and his brother Richard built a
similar house opposite it called Rocklands (close to where the Legionaries of Christ building is).  A five bay
two story with bow projections, it has rendered walls with a cut-granite cornice supporting the parapet.
The front door is approached by four cut-granite steps and has a cut granite surround and the windows
are of the casement type and have cut-granite sills.

Over the years many families have lived here including the Guinness and Dudgeon families.  In 1939
Agnes Ryan, a shrewd business woman purchased it.  She also purchased Rocklands across the road in
1943 (where The Clayton Hotel is now).  She was from Tipperary originally and the owner of the
Monument creameries.  The gardens were used for gowning vegetables during WW1.

The house is now run by the St John of Gods Hospitaller Group, supporting persons with enduring
mental health illness.  Although being used as community centre, it still retains the grandeur of a bygone
age.

​The house was set on fire in 1923  'Burton Hall, Foxrock, the country residence of Senator H.S Guinness,
was maliciously set on fire on Saturday night. The attempt proved a failure. The fire did not take effect, and
little damage resulted....For some time Senator Guinness has not resided at Burton Hall.  The furniture and
other valuables were recently removed from the mansion in anticipation of attack.  Burton Hall contained one
of the finest collections of books in Ireland, including priceless old manuscripts and Irish pamphlets of the
Restoration period, copies of which are only to be found in the great Universities of Bodleian, Trinity and
the Royal Irish Academy.' Freemans Journal.