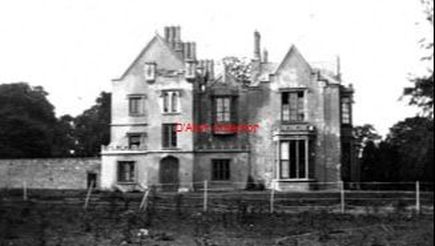 GENERAL            An Elizabethan style house that is thought to have been built in 1833 close to
the site of Stillorgan Monastery. In 1843 it was For Sale on 43 acres.  In 1872 McCurdy &
Mitchell, Architects undertook alterations for Henry Dudgeon.  The painting 'Trial before the
Doge of  Venice' by Paolo Veronese was part of the contents which were auctioned off in 1857.
The house is thought to have been unoccupied from  the 1920's, fell into dereliction and then
demolished in the 1950's.  It had one entrance with a gatelodge  which was on the N11
opposite to where Oatlands College is today.  Henry Dungeon bought the property from Mr
Cox in 1872 for 4500 pounds, an astronomical price at the time.  In 1950 a CPO was issued on a
portion of the plot, including the gateway and wall  by Dublin County Council to allow for the
​widening of the Bray Road.