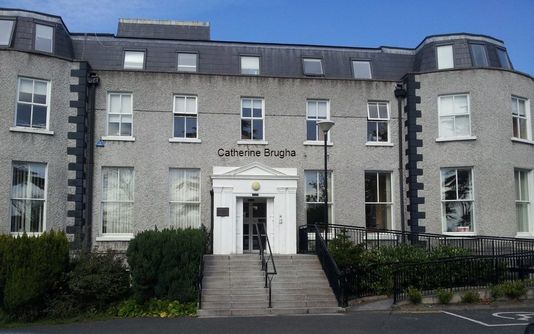 ‘There is upon this holding an extensive mansion house consisting of parlour, drawing room and
several other reception rooms with five bed chambers and dressing rooms, kitchen and servants
apartments in the basement story, a walled garden and ornamental plantations, farm yard and
stabling for six horses, two coach houses all in excellent order.’ (Brassington 1832)

This building had single-story bow-fronted wings but these were considerably altered when they were
raised to the same height as the main house. Gaspar Gabrielli came from Italy and did some work for
​Lord Cloncurry.  Sir Robert Harty, friend and political affiliate of Cloncurry, may have employed
Gabrielli to decorate his rooms in Prospect and his town house, 49 Merrion Square ‘where the
panoramic scenes and landscapes fill the walls from the dado to the cornice’.