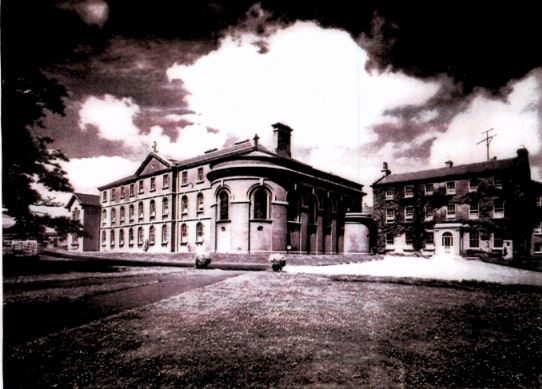 MAP LOCATION    OSI maps of 1838-1845 and 1898-1913 place it in the townland of
Newtown Blackrock and it is annotated as Prospect House and St
Joseph's College respectively.   It appears on Taylor's map of 1816 as
Prospect School.  On Rocques's map of 1760 an unnamed house
thought to be Prospect House stands close to the Carysfort Maretimo
stream.

GENERAL                Prospect House on Temple Hill is a six bay three storey double stack house
originally with two gatelodges at Temple Road and Brookfield Lane.  The rear stack with its
hipped roof and bow ends is the earlier part of the house and dates from the mid 18th Century.
Some plaster work survives and the majority of the windows are original.  The staircase appears
to be early 19th century.

The front stack, also three storey and six bay, is now rendered with 20th century cement and
has an awkward off centre door with a Victorian porch.  The building has been added to and
wings have been demolished over its lifetime.  Its setting and landscaping were compromised
by the building of Barclay Court in the 1980's.   A Chapel was added close to the house circa
1887 which also compromises the aspect.

The building was run as a school for much of it's existence.  In 1818 Mrs Millar tried to keep
Prospect school going with the existing staff and the help of her brother Mr Vance who was,
due to finish his studies but later that year we see the contents of the school, including 59
​bedsteds, for sale.