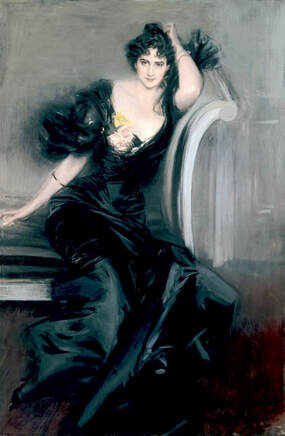 3        Gertrude Elizabeth (Topo) Blood youngest daughter born circa 03.05.1857 at 9
Holles Street, while the family were resident at Harlech, Roebuck, Dublin.  On a
visit to Scotland in October 1880, Gertrude met Lord Colin Campbell.  He was the
5th son of the Duke of Argyll and his elder brother John was married to Princess
Louise, daughter of Queen Victoria.  They were engaged within days but the
wedding was postponed twice as Lord Colin had health problems.  They finally
married on 21.07.1881 at the Chapel Royal Savoy.

Lady Campbell petitioned in 1884 for a separation from her husband, the case being
heard in camera. This was accepted by the court, though the proceedings were kept
private.  Lord Colin Campbell then publicly alleged that she had committed adultery
with the Duke of Marlborough, Colonel Butler and Captain Shaw.  In 1886 she filed
for divorce citing infidelity and cruelty.  The ‘cruelty’ was that Colin had knowingly
infected her with syphilis, a word that the newspaper couldn’t print.  In the end the
jury decided that Gertrude was not guilty of any of the charges of adultery. The
divorce wasn't granted and the legal separation was upheld.  Lady Campbell was
well known in society and turned her attention to journalism.  Colin went to India
and returned to England in 1895 dying shortly thereafter.  Gertrude was a friend
of George Bernard shaw who wrote;-
'Imagine a lady with a lightning wit, a merciless sense of humour, a skill in journalism
surpassing that of any interviewer, a humiliatingly obvious power of reckoning you
up at a glance, and probably not thinking much of you, a superb bearing that brings
out all the abjectness in your nature, and a beauty the mere fame of which makes
you fall into an attitude of amateurishly gallant homage that fulfils the measure of
your sneaking confusion.'
Gertrude died 01.11.1911 aged 54 years at Carlyle Mansions, London.