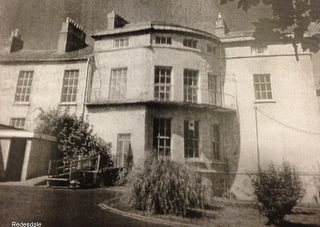 AREA LOCATION      STILLORGAN, Kilmacud Road Upper on the section that runs from the Kilmacud
Road Lower to the junction at Stillorgan Heath.

GENERAL                    One of 4 houses on the lands owned or leased by the Archbold family.  In 1756
John Archbold died and the lands and contents of the house were put up for sale by the Sheriff.  The
land passed to Lt Col John Arabin.  Mitford built a house for himself and called it Ardrinn House, which
was put up for sale in 1806.  Three storey over basement with a D shaped curved return at the
rear of the property, the third storey was very low.  The porch sported half moon windows.
Approached by a long avenue from the Lower Kilmacud Road via a gate lodge, it was the largest and
most expensive property in the area.  A large semi-circular hall greeted the visitor with a wrought iron
balustraded staircase and four doors.  Two doorways either side lead to reception rooms a third door
to a large oval room and the fourth to the main house.  It had two gatelodges on the Kilmacud Road,
​neither of which survive.

William Downes (a market gardener) leased the cottage in the grounds and adjoining land from 1905
to the 1960s. Part of the walled garden remains in the new estate.  He grew everything in the way of
fruit and vegetables and supplied the convent with fresh produce.  He also grew illicit tobacco.  This
was home to both Archbishop William (Magee) of Dublin and Archbishop Richard (Whately) of Dublin
as well as Sir John Mitford, Speaker of the House of Commons and an ancestor to Nancy, Pam, Diana,
Bobo, Decca & Debo better known as "The Mitford Girls".  High Ridge Green off the upper Kilmacud
Road was built in the grounds of Redesdale and may be a nod to the old estate name of Ardrinn.

In 1997 the Sisters of Charity, having sold Linden, put this estate of 3.9 acres up for sale.  An unusual
condition of the sale was that the new owners must demolish Redesdale House.  It went to public
tender on 17 Jul 1997.  The reason given for the sale was that they were moving out of residential care
into community based projects.