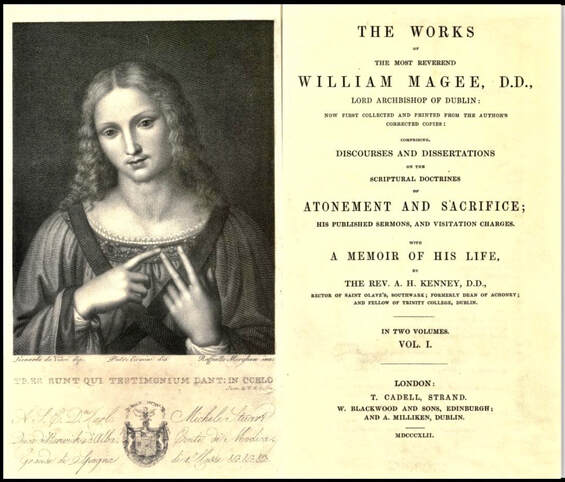 William Magee son of John Magee, a draper and his Presbyterian wife Jane Glasgow was born circa 1765
at Enniskillen, Co Fermanagh.  He graduated Trinity BA in 1786.  He took Holy orders and was appointed
a Deacon to St Kevin’s Church in Dublin.  He married Elizabeth Moulson  in 1793 and they had sixteen
children.  They lived at Rathfarnham when they were first married.  He taught at Trinity College Dublin,
serving as Erasmus Smith's Professor of Mathematics from 1800 to 1811.  He was appointed Bishop of
Raphoe in 1819 and in 1822 became Archbishop of Dublin.  His sermon given on his investiture and
enthronement was indicative of his beliefs.  Below refers to his opinion of Methodists and Roman
Catholics.

'. . . the one possessing a church without which we can call a religion, and the other possessing a religion without
which we can call a church: the one so blindly enslaved as to suppose infallible ecclesiastical authority, as not to
seek in the word of God a reason for the faith they possess; the other so confident in the infallibility of their
individual judgment as to the reasons of their faith that they deem it their duty to resist all authority in matters
of religion. We, my Brethren, are to keep free of both extremes, and holding the Scriptures as our great charge,
whilst we maintain the liberty with which Christ has made us free, we are to submit ourselves to the authority to
which he has made us subject."

​He steadfastly opposed the movement for Catholic Emancipation and was known as Atonement Magee;  a
nod to his book on Discourses on the Scriptural Doctrines published in 1801.  He gained notoriety for
prohibiting the Catholic inhabitants of Glendalough from celebrating Mass.

". . .as they had theretofore done in their ancient and venerated cathedral of St. Kevin".

He also was involved in the burial controversy of 1823/4 prohibiting Roman Catholic priests performing
burial ceremonies and having the prayers of their religion pronounced over the graves of the dead in
Protestant graveyards.  Dr Michael Blake, Catholic Archdeacon of the Dublin diocese was about to offer
some quiet graveside prayers when a Protestant sexton, who many believed was working on the orders
of Archbishop Magee, stopped him.   William was guilty of nepotism, all his sons and sons in law were
given valuable livings in the Church of Ireland.  Elizabeth died 27 Sep 1825 aged 53 and was buried at
Rathfarnham.  William consecrated SS Philip and James, Booterstown in 1824 and shortly before his death,
he donated £1500 to the building of a new church at Monkstown.

William died 18 Aug 1831 at Redesdale, the home of his youngest son William and was buried at a private
funeral at Rathfarnham.  Twelve of his children survived him.  His library of upwards of 12000 books was
sold after his death at the Royal Arcade in College Green.

1               John Magee eldest son born circa 1792 took holy orders and was appointed librarian of the
Cork Cathedral library and curate of the parish.  He was appointed vicar of St Peter’s in Drogheda
in 1829 and treasurer of St. Patrick's, Dublin from 1831.  He married Marianne Ker, daughter of
the Rev James Ker of Listerlin Glebe, County Kilkenny in January 1819.  Marianne died in March
1830 aged 38.

1              William Connor Magee, born 17 Dec 1821 He was ordained in 1844 to the curacy of St
Thomas's, Dublin, but after two years went to Málaga, Spain as he had TB.  On his return
in 1849, he took a curacy at Bath, England and was appointed to the Octagon Chapel in
1851 and afterwards made prebendary of Wells Cathedral.  He married Anne Nesbitt
Smith, second daughter of the Rev Charles Smith, Rector of Arklow, on 14 Aug 1851 at
St Thomas's Church, Dublin.  In 1860 poor health forced him to accept the living of
Enniskillen.  In 1864 he was made Dean of Cork and in 1866, Dean of the Chapel Royal,
Dublin Castle, and a chaplain to the Lord Lieutenant.  He was appointed Bishop of
Peterborough.  He was elevated to the see of York in January 1891 and enthroned on
17 Mar 1891. He died on 5 May 1891, just four months after his appointment.  He was
buried at Peterborough Cathedral and was survived by his wife and three daughters.

4              Thomas Perceval Magee second son born circa 1797.  He graduated Trinity and took Holy orders.
He was his father’s Domestic Chaplin and in 1826 was appointed to the prebend of Tipperkevin
worth 127L and 78 acres per year.  In 1831 Daniel O'Connell stated in the British House of
Commons that T P Magee held 11 livings.  He was Archdeacon of Kilmacduagh and Rector of St
Thomas’, Dublin.  He married Elizabeth Frances De Butts, eldest daughter of Major General de
Butts of the Royal Engineer at Swanick Church, Bath in April 1827.  Thomas died 6 Dec 1854 aged
57 and was buried at Rathfarnham.

2           Henry Magee studied at the Royal Military, Naval University In Dublin and entered
Sandhurst in 1857 and had attained the rank of Captain in 1869.

7              Lydia Magee born circa 1805 married the Rev George Nesbitt Tredennick in 1827 at Dublin,
George was appointed the living of Ballyshannon, County of Donegal after they married.  The
couple had a least ten children.  Lydia died at Kildoney Glebe on 9 May 1866.  George died on
24 May 1880 at Druid Hill Killiney and was buried Tetunny graveyard aged 84 and left 18K in
personal estate.