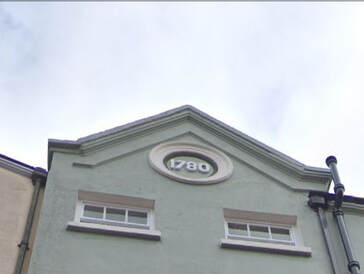 Foot family of Stillorgan and Blackrock

Lundy Foot was the son of Geoffrey Foot, a tide waiter (customs official) and Jane Lundy who
married on 13 Apr 1732 at St Mary’s Donnybrook.  His mother was the daughter of James Lundy
of Ringsend and died in 1745 age 32.  His father Geoffrey is thought to be a descendant of John Foot
from Cornwall*.  His brother Jeffrey Foot  married Catherine Fitzsimmons on 6 Sep 1754 at St
Andrews, ​Dublin.

Lundy was a tobacco and snuff merchant/importer, famous for the ‘Blackguard Snuff’ brand.  He
traded from various places in Dublin including, Blind Quay and 5 Essex Bridge.  Their premises
at Essex Gate is a survivor and the logo LF & Co and date of 1780 on roundels are high up on the
gable walls of the building.  On 1 Jun 1758, Lundy, tobacconist of Blind Quay married Catherine
Williams, the daughter of Thomas Williams.  The business on Blind quay was at the sign of the
Virginia Planter.  He became a JP in 1786 and was offered the position of Sheriff of Dublin, he
declined and opted to pay a fine instead.  Lundy died in 1808 and Catherine died in 1810.

1               Geoffrey Foot born circa 1762 married Eleanor Williams, daughter of James Williams,
Sheriff of Dublin on 31 Dec 1790 at St Marys.  They lived at Kinvere House, Templeogue
now known as Cheeverstown House.   Geoffrey died 2 Sep 1824 and left his business
to his eldest three sons.  By 1827 they had a shop in Westmoreland Street.  Eleanor
died at Proby Square, the home of her daughter Cecelia on 3 Apr 1865 age 92.

1      Lundy Foot, eldest son born 1793 married firstly Elizabeth Vicars eldest daughter of
Thomas Vicars of Leeson Street at St Peters on 7 Nov 1817, he secondly married
Lilias Callwell in 1819 and thirdly married Harriet Cunningham daughter of John
William Cunningham, Vicar of Harrow  at Middlesex on 28 Nov 1827.  He was
incumbent of Whitechurch before becoming Vicar of Longbredy in 1829.  He died at
Longbredy Rectory in Dorset on 5 Jan 1873.

3      George Octavius Foot baptised 31 Jan 1838 in Middlesex was the youngest son of
James Foot of Hyde Park and the grandson of Lundy Foot, the famous Dublin
Tobacconist and snuff merchant.  George married Martha Grace Graves of Dublin
the daughter of the late William Graves at Stillorgan Church on 12 Jun 1867.  He was
the executor of his aunt Cecelia's Will, the contesting of which, ran for years in the
courts.  He lived at Littleton, Stillorgan and in the 1880's he was a commercial traveller
for a cigar company.

3      Simon Foot third son born circa 1796 at Dublin.  Simon was the 3rd son of Geoffrey
Foot of Hollypark, Rathfarnham and the grandson of Lundy Foot (1735-1805)
Tobacconist of Dublin.  He married Marianne Glasscock, second daughter of Edward
Barclay Glasscock in Hampstead on 30 Jul 1827.  He lived at Marlfield in Cabinteely,
Rockfield and Sommerton Lodge in Kingstown before returning to the family house,
Hollypark Park in Rathfarnham.  In 1836 he moved to the 4th Villa, Avoca Tce, Avoca
Avenue in Blackrock.  Simon died at Avoca Terrace, 1 Nov 1873.  It appears that his wife
sold the business to J G McCormick of Stradbrook in 1884 and moved to London.

8        Frederick Foot born circa 1807 took Holy orders and married Sophia Pemberton on
16 Jul 1831 at Bannow Church.  He was appointed rector of Carrick on Suir and then
incumbent of Fethard, Co Tipperary in 1863.  Sophia died 20 May 1861 at Waterford and
Frederick died 23 Nov 1871 at Kingstown.
​
​                         1           George Foot born 12 Jun 1833.  After serving for several years under the late W R Le Fanu
on the construction of branches of the Great Southern and Western Railway he went to
London and was appointed by Charles Blacker Vignoles as a assistant engineer on the
construction of the Tudela and Bilbao Railway in Spain.  He went out to Mexico in 1865
and was appointed Resident Engineer on the construction of the Mexican Railway.  He was
appointed Engineer-in Chief of the line in 1872.  He also held the appointment of Consulting
Engineer, during construction, of the Mexican Central Railway between Mexico City and
Leon.  He married Geraldine McSwiney, daughter of Thomas Cooke at Holy Trinity Church,
Brook Green, London on 8  July 1896.  George died in Mexico City on 14 Jan 1906, aged 72.

9      William Foot, the brother of the Rev Frederick Foot,  the son of Geoffrey Foot of Holly Park
and the grandson of Lundy Foot (1735-1805) was born circa 1813 in Dublin, he married
Margaret Hester (Meta) Revell of Seapark, Magheramore, Wicklow at Dunganstown in
December 1836.  She was the daughter of John Revell of Seapark, Dunganstown, Co Wicklow.

William lived in various  places during his life, Raglan Road, Seapoint, Northumberland road
and  Ballykeane near Redcross.  He was a JP, a member of the Chamber of Commerce, a
director of the Dublin, Wicklow and Wexford Railway company and a governor of the Royal
​                          Hospital at Baggot Street.

4       William Foot  born 2 Dec 1889 at 34 Morehampton Road married Aileen
Katherine Curling in Bombay in October 1922.   He joined the 2nd Batt.
Coldstream Guards and was mentioned in Sir John French's despatches and
awarded the Military Cross.  He was educated at Shrewsbury and Trinity College,
and at the outbreak of the war at once offered his services.  He was a keen
sportsman and an International Hockey player.  William died in 1971 at
Woodlands Park and Aileen died in 1978, both are buried at St Brigids, Stillorgan.

3                Lundy Foot born  circa 1765 married Ann Gilbert  in 1790.  Ann was the daughter of book
binder William Gilbert.   He was  a barrister and involved in Ponsonby Shaw affair which saw
three of the Kearney family brought from Kilmainham Jail and hanged in a field beside the
River Dodder at Old Bawn.  Lundy lived at Footmount near Mount Venus, now known as
Orlagh but moved to Roskercon in Co Kilkenny.   In 1794 he applied for the position of City
Recorder but was not successful.  Lundy was stoned to death on 3 Jan 1835 aged 71 at
Roskercon, Kilkenny and buried at St Matthews, Ringsend.

* Although many sources quote Devon as the origins of this family, but it is more likely to be Veryan, near
​    Truro in Cornwall.  See MRD Foot's book on the family.  Our thanks to John Breen for this information.