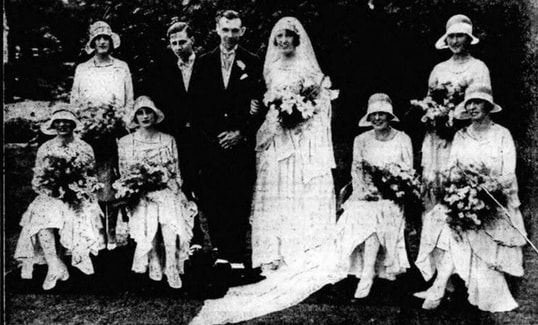 Joseph Ferguson Peacocke born 5 Nov 1835 at Abbeyleix, Queens County, son of George Peacocke, MD
and Catherine Ferguson.  He graduated Trinity and took Holy orders.  He was ordained deacon in 1858
and priest of in 1859.  He was curate at St Mary's, Kilkenny, from 1858 until 1861, then for two years
took up the position of secretary to the Hibernian Church Missionary Society.  From 1863 until 1873, he
was curate of Monkstown Church, Co Dublin.  He married Caroline Sophia Irvine on 18 May 1865 at
Trory Church, Fermanagh.  Sophia was the youngest daughter of Major Irvine of Killadeas, Fermanagh.
The couple had five children.  In 1873 he was appointed rector of St George's, Dublin and in 1878 he
returned to Monkstown as rector.  He was appointed a Canon of St Patrick's Cathedral, Dublin in 1879
and he was awarded the degree of Doctor of Divinity in 1883.  He held the professorship of pastoral
theology in Trinity College in 1884.  He was appointed the Bishop of Meath in 1894 and then
Archbishop of Dublin from 1897 until 1915.  He died 26 May 1916 at Hastings in Blackrock and left
nearly 23K in personal estate. He was buried at Deansgrange.  Caroline died on 26 May 1919 at
Seagrove Square, Monkstown and was buried with her husband.  She left 3K in personal estate.

1                Joseph Irvine Peacocke, eldest son born 28 Nov 1866 at 6 Grosvenor Terrace, Monkstown was
educated at Corrig School and Trinity College, Dublin.  He was ordained in 1891 and was curate
of Shankill, Belfast.  In 1894 he became Rector of Christ Church, Lisburn.  He married Ada
Victoria Stanley Barker on 6 Apt 1902 at St Thomas’ Church, Belfast.  He was appointed rector
at St Marys Dublin and then Rector of Bangor until his appointment as Bishop of Derry and
Raphoe in 1916 just weeks before his father’s death. He was a fan of cricket and rugby of which
he played both and was president of Derry Cricket Club.  He resigned in 1944 and retired to
Ballycastle.  Ada died in April 1956 and Joseph died in January 1962.

3                  Gerald William Peacocke born 25 Jun 1869 at 6 Grosvenor Terrace, Monkstown took Holy orders
and was appointed curate of Holywood, Co Down.  He married Kathleen Amelia Crozier at
Monkstown Church on 15 Sep 1896.  Kathleen was the only daughter of Francis Crozier,
solicitor of Carrigbrennan, Monkstown.  He was appointed rector of Dundela Belfast in 1900,
Geashill in 1913 and later Archdeacon of Kildare.  Gerald died in 5 Sep 1950 at the Adelaide
Hospital, late of Inniskeen, Greystones.

4                 Reginald Christopher Peacocke born 5 Apr 1871 at 1 Belgrave Square was educated at Corrig
School and graduated from Trinity College, Dublin.  He married Evelyn Claire Hyde at Bangor on
24 Aug 1898.  Reginald was a medical doctor living at Selby Oaks, Worcester and Evelyn was the
daughter of William Hyde of Bangor, Co Down. They were living at Kings Norton in 1901 and by
1904 they were living at 10 Avoca Terrace.  Reginald was church warden of Stillorgan in 1910 and
​                   remained on the vestry until 1915.  He acted as substitute medical officer for Stillorgan and
Blackrock and was medical officer for Blackrock in 1917.  He worked as an anaesthetist at
Monkstown Hospital and the Ministry of Pensions Hospital in Blackrock.  He was Asst Branch
Director of the Red Cross for Co Dublin during WW1 for which he received a CBE in 1919.  He
lived at Blackrock lodge from 1919 until his death.  He travelled to the Canary Islands in February
1936.  He died 16 Mar 1936 at Monkstown Hospital and left personal estate in England valued at
3K.  He was buried at St Brigid’s, Stillorgan.  Evelyn died 31 Oct 1950 at a nursing home late of
Blackrock Lodge and was buried with her husband.

1                  Joseph Reginald Hyde (Joe) Ferguson Peacocke born 23 Mar 1904 at 2 Avoca Terrace,
Blackrock.  He was educated as Rossall School in Lancashire and Trinity College,
Dublin.  He was an international cricket player.  He played on the losing team
against Scotland in 1926.  He died at Umtali in the Federation of Rhodesia and
Nyasaland on 5 Dec 1961.

2                  Victor Evelyn Loftus Peacocke younger born 30 Apr 1906 at 2 Avoca Terrace, Blackrock.
He took holy orders and was appointed curate of St Barnabas in Belfast where he
remained for 4 years. He was appointed curate at Woodford Green in 1837 and Vicar
of North Weld in 1941. He married Joan Madelaine Chetwood at All Saints, Woodford
on 1 Aug 1942.  Joan was the daughter of A S Chetwood of Woodford Essex.  Victor
died at Copythorn Vicarage on 2 Apr 1960.

4                   Adopted daughter Josephine Patricia Peacocke Bottomley born 18 Jul 1902 baptised
at Stillorgan on 3 Nov 1902.   Patricia was the daughter of William Grey Porter
Bottomley and Josephine (Feenie) Hyde.  Her mother died just days after she was
born and her father was abroad with the intelligence services.  Patricia married Henry
William Basil Stewart on 5 Jun 1927 at All Saints, Blackrock.  Basil was resident at
Strathallen, Strandtown, Belfast, the son of John J Stewart and the grandson of the late
Canon H W Stewart of Knockbreda.