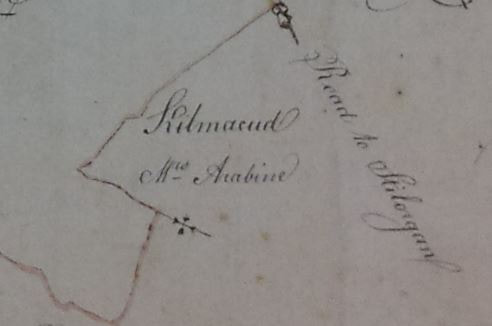 From a Huguenot family, Bartholomew was the aide de camp of the Earl of Galway, he was involved
in the conquest of Athlone and the siege of Athlone.  He is also noted as next of kin for Louis De Lisle
(of Lord Galway’s Regiment) in De Lisle’s Will of November 1710.

1          Henry Arabin born 1752 graduated TCD.  Henry of Moyglare married Ann
Faviere Grant of Scottish extraction at Stephen’s Green, Dublin on 12 May 1781.
He lived at Corkagh in Dublin and was involved with the gunpowder mills there.
He was a member of the RDS.  Ann died in 1839 and Henry died two years later
in May 1841.

4       Frederick Arabin fourth son, married Eliza Mountain eldest daughter
of the Lord Bishop of Quebec on 31 May 1823.  He was a captain in the
Royal Artillery and is listed in Hart's Army List for 1841.

5       Lieut. Augustus Arabin was onboard the Warspite in 1825, he married
Margaret Lucy Mountifield at Portsmouth on 30 Jan 1828

7       John Ladaveze Arabin was living at Corkagh from 1841 to 1845 and in 1849 was
leasing land from Henry Fulton in Kilmacud.  He was Lord Mayor of Dublin
in 1845.  He had three children by his mistress Mary Ann Carroll and was
accused by his mistress of seducing their daughter which produced a child called
Jemima.  He strenuously denied the charges.   He married Elizabeth Askin at
Taney Parish on 14 Jan 1848, both gave their address as Woodley, Kilmacud.