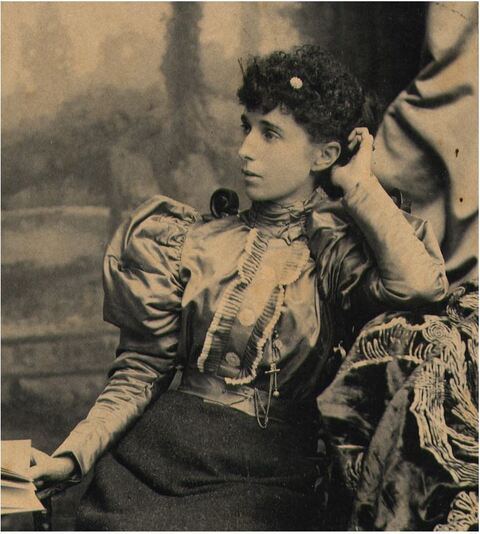 Garrett Moore son and heir of Garrett More and his first wife born September 1784 at Cloghan Castle
and the grandson of John Hubert O’Moore of Annabeg.  He graduated BA from Trinity in 1806.  The family
claimed the tile of The O’Moore through descent from Rory Óg O'More of Leix (Laois) who died 1578 and
the eldest son used the name O’ Moore.

Garrett married Mary Bateman daughter of John Bateman of Altavilla, County Limerick and Oakpark, Co
Kerry.  They lived at Redesdale in Kilmacud from 1826 to 1828 and were living at Denzille Street by 1832.
His estates in Co Mayo which were over 4K acres, were put up for sale including Moate Demesne in 1827.
He was a gentleman of large fortune and lands in the Kings County and the County of Clare.  His father was
declared a lunatic in 1821 and died 20 Nov 1824 aged 82 and was interred at Meelick graveyard.  His sister
Jane married Lieutenant O Hehir of the 60th foot.  His step mother Jane O’Moore nee Foster died in April
1832 at Denzille Street.  Mary died in January 1831 at Cloghan Castle and Garrett died suddenly on
8 Nov 1833 aged 69 whilst completing a transaction with Mr Birmingham, salesmaster of Smithfield.

2            Garrett O’Moore eldest son born in 1810 had a stud farm at Cloghan Castle.  He was High Sheriff of
the County of Roscommon in 1845.  He eloped in October 1822 and then married Thomasina Matilda
Blair on 10 Nov 1852 at St John’s Church London.  Thomasina was seventeen, beautiful and an heiress
and the youngest daughter of Captain Thomas Blair of the Honourable East India Company Service
and step daughter of Captain Maher of O’Bridge House, Taunton.  The elopement caused quite a scandal
in both Ireland and England.  He served as High Sheriff for the King’s County and Roscommon from
1842 - 1845.  In 1854 he sold all his estates in Ireland nearly 10K acres and moved to Paris.  Cloghan
Castle was sold to Dr & Mrs Graves.  He died on 30 Aug 1864 at the age of fifty-two years at Selg,
Normandy where he gone for a change of air.  During his life he was recognised as ‘The O'Moore.  This
was later disputed by John O’Donovan who said that the family could not trace their lineage further
​              back than 1611.

5           Mary Emily Creagh, second daughter born 18 Mar 1841at Montrose.  As only surviving
daughter she married George Spaight on 19 Mar 1861 at Kilnasoolagh Church.  George was
the only son of the Rev George Spaight.  Mary was given away by her uncle Giles Vandeleur
Creagh.  George worked for the Montreal Gazette as a sub editor and drowned with a
colleague in the St Lawrence River on 25 May 1871.  Mary secondly married Vladimir
Antoniwitz, Baron Von Holdt, Knight of The Order of St Anne and Knight of the Vladimir
Cross at St Petersburgh on 23 Nov 1872.

8           O'Moore Garrett Creagh aka O'Moore Creagh, sixth son born 2 Apr 1848 at Cahirbane (sic),
Co Clare was a senior British Army officer and an Irish recipient of the Victoria Cross in 1879.
He was with the Bombay Staff Corps and married Mary Leticia Longfield Brereton, daughter
of John Brereton of Parsonstown on 17 Jul 1873 at St Bridin's Church, Birr.  Mary died circa
1876, and O'Moore secondly married Elizabeth Reade of Kelverton daughter of E Read of
Kelverton, Bucks.  Garrett was Commander in Chief of the Indian forces  and appointed
Knight of the Star of India in 1911.  Garrett died 9 Aug 1923 at 65 Albert Hall Mansions,
London survived by Elizabeth his wife.

*             Giles Vandeleur Creagh of HM 81st Regiment married Elizabeth (Jean Elizabeth) Creagh on
6 Aug 1831 at Holy Trinity Church, Gosport.  Elizabeth was the daughter of Colonel Creagh, late 81st,
formerly 92nd/93rd Highlanders and died at Boulogne aged 27.  She was buried there on 27 Jun 1834.
Her mother was Mary (died Lesieux, France in 1835) and her father was aide de camp to his Majesty.


This family tree is on the presumption that Grace Emily Moore married James Creagh and that
Elizabeth Moore married Giles Vandeleur Creagh.