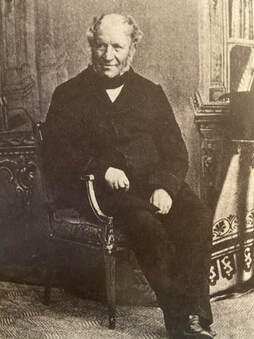 William Dargan was born in County Carlow.  After finishing school he worked with his father who
was a tenant farmer on Lord Portarlington's land.  It is believed he worked in a surveyor's office in
Carlow before getting a job with Thomas Telford on the London to Holyhead road project which
ran from 1819 to 1824.   His next project was in a supervisory capacity on the Raheny to Sutton
road.  Having won contracts to provide turnpikes including  the North Circular Road and at
Malahide in 1831, he then won the contract to build Ireland's first railway from Dublin to Kingstown.
A five and a half mile stretch where trains would run at an average speed of 20 miles per hour. The
engineer on the project was Charles Vignoles another of Telford's students.  This project was not
​without problems including the line running through the access to the sea from Lord Cloncurry house
and Edward Lees house at Blackrock.  These problems were resolved with Dargan designing a
beautifully crafted bridge for Cloncurry at Maretimo and Mr Lees at Blackrock House being paid
compensation.  The project started in on 4 Mar 1833 but in June there was a work stoppage as workers
were unhappy with the rate of pay.  This was resolved very quickly when Dargan introduced a new way
of paying by productivity and was soon employing nearly 2000 men.  Dargan continued to win railway
contracts and it is thought that he is responsible for nearly 600 miles of railway built in Ireland.  He
offered unskilled labourers a flat rate of 9 shillings during winter and ten shillings during the famine
years which they appear to have been quite happy with.  He was considered to be the best and most
extensive employer of his day, possibly employing upwards of fifty thousand men.

He set up a flax farm at Rathcormac in Cork and a flax mill in Chapelizod, neither were a success.
He won the contract for the Ulster Canal and the Belfast waterworks and was the founder of the
Great Exhibition of 1853 which was to showcase Irish Industry and Art.  Although its purpose was
fulfilled and the exhibition was a huge success, Dargan lost twenty thousand of his own personal
money in delivering it.   According to some reports he was offered a Baronacy by Queens Victoria
on her visit to Ireland but it's more likely that he was offered a Knighthood which would have
elevated him to Peerage and would have caused him a problem because of his hands on approach
to his projects and begged permission to decline the offer and instead accepted a bust of the Queen
and the Prince Consort.

He was the contractor on the Bray railway extension and instrumental in Bray becoming a seaside
resort - designing the esplanade, terraces of houses, Turkish baths and the installation of street lights.
Plants from Mount Anville were transplanted into the public garden at Bray seafront.  He became a
DL and JP in 1859 and in 1863 was Sheriff of Dublin.

In 1863 a statue of William Dargan was placed upon a pedestal on the lawn of the Royal Dublin
Society, in front of the National Gallery of Ireland.  This was sculpted by Thomas Farrell who
moved to Redesdale House in his later years.

In May 1865 Dargan suffered a fall from a horse at the top of Booterstown avenue on his way
to Mount Anville from Donnybrook.  He suffered a cut to his head and was unconscious when
John Edward Vernon of Mount Merrion Demesne found him and had him conveyed to Mount Anville.
Although this fall is often given as the reason for his death, this seems unlikely as he was present
when the medals were awarded for the exhibitors of the Great Exhibition and made frequent trips
to London in the following months.  His financial problems seem to start around this time.  In July
of 1865 he sold Mount Anville to Madame Scully of the Sacred Heart nuns for 10,000 pounds.
The contents of the house were sold.

In November 1866 rumours circulated that he had executed a deed in favour of his creditors, that his
liabilities exceeded one million pounds and that the liquidator was expected to pay out 20 shillings
in the pound.  This was refuted and that in fact, although he owed 180K that his assets exceded 400K.
In December 1866, his trustees Robert Hoey of Kilmacud House and Thomas Pooley sold his
lands in Wexford and Bray and the Royal Marine Hotel in Kingstown was also disposed of.
​
William died of liver disease, most likely cancer at number 2 Fitzwilliam Square East on the evening of
7 Feb 1867.  His funeral was one of the biggest that Dublin had ever seen with two hundred and fifty
coaches following the cortege which was preceded by hundreds of working men.  He was buried at
Prospect cemetery (Glasnevin) in a vault in the O'Connell circle.  After his death his friend and neighbour
Robert Hoey of Kilmacud House also took on the onerous tasking of collecting money from some of his
personal debtors to ensure the financial security of his widow.  Jane Dargan his wife died 22 Jun 1894
at Annerly Park, London aged 91.

He left a huge portfolio of works including the viaduct in Milltown which would be familiar locally and the
cable stayed bridge for the LUAS in Dundrum was named Dargan bridge in his honour.

1          William Dargan a Roman Catholic is thought to have been the son of Patrick and Elizabeth Dargan*
and born in County Carlow circa 1799, if these are his parents they are buried at Killeshin
graveyard, Co Laois.  He married Jane Arkinstall, an Anglican at Adbaston, Staffordshire on
13 Oct 1828 and he gives himself as being of the parish of St Thomas, which is not a reference to
his religion but an area of Dublin similar to that of Dublin 1 of today.  The couple had no children
but were very close to the children of his sister who married James Boland of Mountmellick.
His niece Maria Allen was married from Mount Anville to George Philips at Taney in 1856 which led
some to believe he was Church of Ireland.  His niece Kate Crosby married John Roche in New York in
​            1858 and he left 1000 pounds in his Will to niece Louisa Haslam.

1            James Dargan born circa 1841 married Teresa Johnson daughter of Richard and Mary
Johnson from Mill Mount Avoca on 9 Jan 1866.  James was a civil engineer and Teresa
was the granddaughter of Matthew Johnson who had discovered the mines of Tigroney
and Cronebane near Avoca, and the grand niece of Father Daniel Murray of Sheepwalk,
Avoca who became Archbishop of Dublin.  James died 11 Feb 1873 aged 32 at Cork while
working on a railway project at Bandon.  Teresa moved back to Millmount and lived with
her sister Margaret Johnson.  She died there on 19 Jan 1929 age 86.

1     John Dargan qualified as a civil engineer and immigrated to Canada in 1872.


* Dargan Headstone
Erected by Patrick Dargan in memory of his mother Sile(?) Dargan who departed this life
24th April 1801 aged 76 years. Lord have mercy on their souls Amen. And also his wife Elizabeth
Dargan who dept. this life Dec. the 24th 1813 aged 42 years and of the above Patrick Dargan who
departed this life (stone broken) aged 83 years. Also his children Michael, Damien, Bridget & Patrick
who died young.