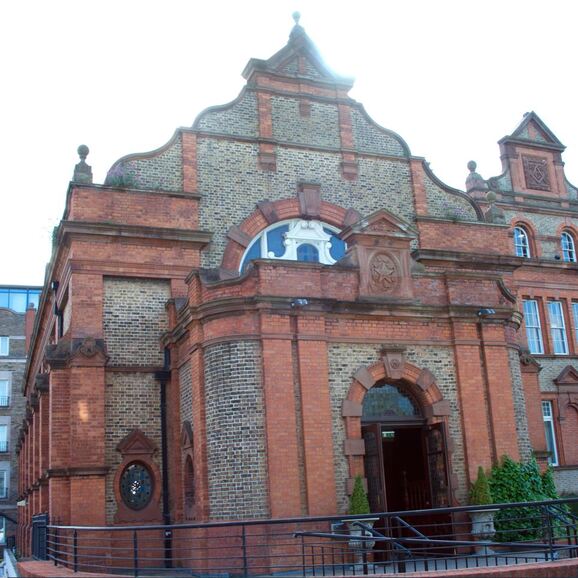 Masonic Girl's School, Merrion now a hotel in Ballsbridge. Photography courtesy of Priory Studios.
McCurdy family of Blackrock & Stillorgan
​
William McCurdy was head porter and clerk at Trinity College.  He married Mary and was
at the Provost House, Trinity on the night of the 1851 Census.  Mary died 1 Dec 1866 at
Marino Lodge, Monkstown aged 70 and William died 10 Mar 1868, late of Marino Lodge,
at the home of his son in law at 41 York Street.  Both were buried at Carrickbrennan.

2              John McCurdy, born circa 1823 was a civil engineer and an up and coming
architect in 1854 when his design for the museum building at Trinity was
accepted.  This brought him into a public argument with Sir Thomas Deane who
omitted to credit him with the plans.  He would remain architect to the Board of
Trinity up until his death.  He worked from his office at 34 Westland Row, designing
and preparing tenders until 1861 when he removed to 1 Harcourt place, Upper
Merrion Street.  He married Lucy Heinekey, youngest daughter of Robert Heinekey
at Rathfarnham Church on 4 Oct 1857.  A keen yachtsman, he was a member of the
Prince Albert Yacht Club and the owner of a yawl named Amberwitch which won
prize money of 240 pounds between 1868 and 1870.  In 1870 he sold the Amberwitch
to Mr Alexander of the Royal Irish Yacht Club and bought the Wavecrest, a much
lighter boat.

John had a great ability to adapt and enlarge buildings making them more useable,
this he accomplished with his remodelling of the Shelbourne Hotel and also
Kilmainham jail.  He also completed many new builds, churches and hotels
including All Saints on Carysfort Avenue between 1868 and 1870, the Royal Marine
in Dun Laoghaire between 1865 and 1865 and Dunardagh in Blackrock.  A full list
of his works can be found at the Dictionary of Irish Architects.  They lived at The
Cottage, Newtown Park from 1870 to 1872 and John became All Saint's first
​                churchwarden when it was opened in 1870.

He suffered health problems and in 1873 he took into partnership William Mansfield
Mitchell so that he could spend winters in North Africa and less time travelling to site,
together they would complete many buildings including the Masonic Girl's School at
Merrion and the extension to St Columba's school in Rathfarnham.  John died aged
62 at Elsinore, Dalkey on 12 Sep 1885 and Lucy died 14 Aug 1928 aged 93 at Brighton
Terrace, both are buried at Deansgrange.

3              Margaret Helen McCurdy (Helen) born circa 1824 married Robert Hazelton a dental
surgeon of Armagh and son of Robert Hazelton, a pawnbroker on 22 Nov 1854 at
St Mark’s Dublin.  Her brother John was one of the witnesses.  The couple lived at
34 Westland Row from where Robert ran his dental practice, maintaining his
practice in Armagh which he visited every second Saturday.  The couple were
living at Sandycove Road in Glasthule in 1901.