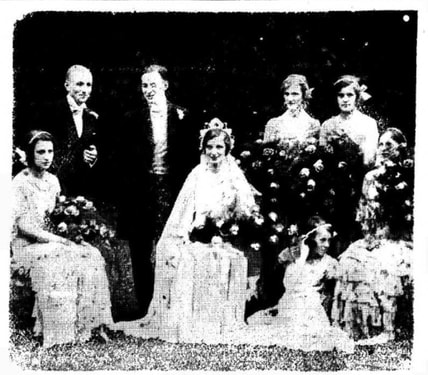 William Findlater fourth son of John Findlater and Mary Johnston of Melbeach, Monkstown married
Lucie Heinekey eldest daughter of George Marshall Heinekey of Whitworth Road, South Norwood,
Surrey.  The family lived at Melville from 1899 to 1914 and moved to Glensavage in 1932 and
remained there until 1968.

1          Marjorie Findlater born 26.01.1892 at Grove Avenue, married Edmund Monsell Mitchell son
of George Mitchell on 01.09.1914 at All Saint's Church, Carysfort Avenue, Blackrock.  Edmund
served in WW1 and joined Messrs Findlaters on retiring from the army becoming MD shortly
before his death on 13.08.1945 at The Albany, Monkstown.  He was survived by his widow
and three daughters.

2          Doris Findlater born 27.04.1895 at Grove Avenue.  She was Chair of the RHSI in 1966 and
elected a life member.  The greenhouses along the side of the house were where Doris
pinned her bronze, silver and gold certificates from each years flower show at the RDS.  She
was a very experienced gardener, cultivating 30 new species of Nerine Lilies including the
'Glensavage Gem' and 'Glensavage Glory'.  She died 07.12.1981 and was buried at St
Brigid's Stillorgan.

4          Sheila Mary Findlater born 12.12.1902 at Melville was secretary to Lady Meath in Kilruddery
for 32 years.  She was involved with the Irish Girl Guides from its inception and became a
Commissioner.  She died on 13.01.2008 at Altadore Retirement Home aged 106 years and
was buried at St Brigid’s, Stillorgan.

5          George Dermot Findlater born 31.10.1905 at Melville married Elizabeth Dorothea Maxwell
de Courcy Wheeler eldest daughter of Major H E de Courcy Wheeler at the Parish Church
Kilmeague, Co Kildare on 15.07.1932.  Dorothea was an Irish International Hockey player
receiving her first provincial cap in 1932 and her first cap for Ireland in 1936.  They lived at
Abilene on Newtownpark Avenue.  Dermot died 29.04.1962 and his funeral service was held
at All Saint's Church, Blackrock and he was buried at Deansgrange.

They had four other children - Alex, Grania, Suzanne and John.

William Findlater died at his residence Glensavage on 31st July 1941 and his funeral service was
held in All Saint's Church, Carysfort Avenue on 2nd August 1941.  He led a very full life as director of
Findlaters but was also a director of Jurys Hotel Company and a partner in the Olympia Theatre.