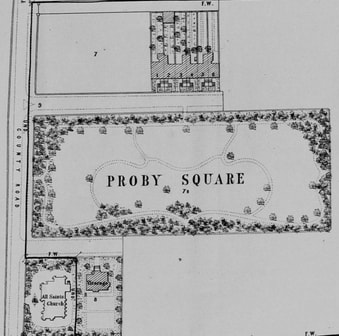 William Henry Mitchell born circa 1787 came to Ireland circa 1810 from the North of England.  He ran
a confectionery business at 10 Grafton Street trading as William Mitchell & Sons from 1819.  William
died aged 53 at Fairview on 09.09.1840.

1          George Patrick Mitchell son of William Henry Mitchell born circa 1815 married Sarah Mansfield
on  18.07.1840 at St Mark's, Kennington, Surrey.  Sarah was born circa 1812 and was the daughter
of William Mansfield.  George took over the business at Grafton Street on the death of his father
was a confectioner of 10 Grafton Street.  George died aged 31 at his residence in Windy Arbour,
Dundrum on 03.02.1847.  Sarah advised the public that she will be taking over the running of the
business.  Sarah died 27.01.1888 at Lisalea, Blackrock.

1          William Mansfield Mitchell born 7 Aug 1842 married Louisa Hoffe in 1868.
William was an architect and lived at Glenart, Stillorgan from 1882 to 1887.  He set
up practice in 1867 and in 1872 he went into partnership with John McCurdy, a practice
which lasted approximately ten years before going solo again.  In 1905 he took his sons
Charles and John into the practice.  Buildings he designed include the The James Weir
Home for Nurses with its unusual loggia and Pennys flagship store in Mary Street,
originally designed as Todd Burns Department store.  William died 12 Mar 1910 at
Abbeylands, Ballybrack and Louisa died 3 Nov 1932 at Winborn, Glenageary aged 85.
Both are buried at Mount Jerome. For a complete list of works see Dictionary of Irish
Architects.

4          Edmond Monsell Mitchell born 19 Mar 1879 worked as an insurance officer.  He married
Marjorie Findlater, daughter of William Findlater on 1 Sep 1914 at All Saint's,
Blackrock.  He served in WW1 with the rank of captain as quartermaster with the RAMC.
On retiring from the army, he joined Findlaters.  He became Managing Director of
Messrs Findlater and Co in 1945, he was a director of the Empire Theatre, Belfast and
the Grand Hotel, Greystones. Edmund died 13 Aug 1945 at The Albany, Monkstown.
He was survived by his wife and three daughters.

Unaware that her husband was in Ireland, thinking him in France, Beatrice and the
children were in the crowd, flag waving in Blackrock when the Sherwood Foresters
marched through.  Frederick was also unaware that his wife had returned to Blackrock
to visit her family.  His fellow officers record him dropping out of line and hugging them
Captain Frederick Dietrichsen, Adjutant of the Battalion of Sherwood Foresters died on
26 Apr 1916 at the battle of Mount Street and was taken to Baggot Street Hospital and
buried at Deansgrange on 29 Apr 1916.
​
1          Christian Frederick Dietrichsen born 23 Oct 1911 at 10 Redcliffe Road,
Nottingham.
2          Beatrice Sibely Dietrichsen born 1913.