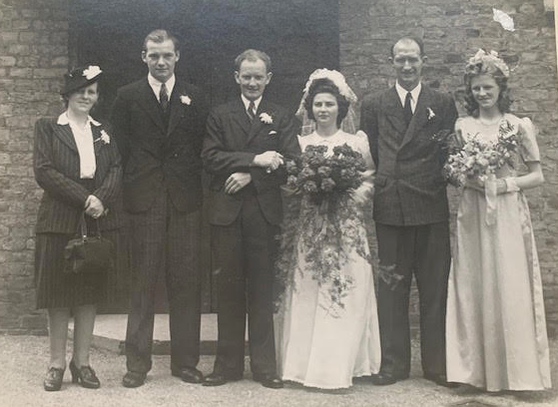 Robert Savage born circa 1855 in Co Meath, son of Thomas Savage, a carpenter married
Frances Jane Nelson at Donaghpatrick Church on 2 May 1882.  Frances was resident at
Donaghpatrick and the daughter of William Nelson, parish Clerk.  Witness: Annie Savage
and William Nelson. Robert was a gardener living at Donaldstown, Kilcock.  Robert was a
land steward and gardener.  In 1911 they were living at Belleek, Co Mayo and nine of their
eleven children had survived.  Robert worked for the Saunders Knox Gore family on the
Belleek Manor Estate from 1895 to 1911.

1              William Alfred (Alfred William) Savage born 8 Aug 1884 at Donaghpatrick.  Alfred
was working at Burton Hall in 1907 and married Elizabeth Hamilton at Kilternan
Church on 12 Nov 1907.  Lizzie from Tyrone, was the daughter of John Hamilton,
a farmer and was resident at Sandyford at the time of her marriage.  The family
moved to Corbollis where Alfred possibly worked for the Norman family of
Corbollis House.  The family next moved to Waterford where Alfred was the head
gardener for the Congreve family of Mount Congreve.   He was a successful exhibitor
of apples and in 1930 won 17 prizes at the Kilkenny show and was awarded a silver
medal.  He was in great demand as a judge at County Shows.  Mount Congreve was
inherited by Alexander Congreve and the garden were opened to the public in 1957.
The house and contents were put up for sale in 2012 after his death.
​
1            Muriel Savage born 14 Dec 1909 at Oghill, Cookstown, Co Tyrone married
Robert Bell on 14 Jul 1936 at St Peter’s Church, Killoteran, Waterford.  Robert
was a clerk and only son of William Bell a gardener from Stewardstown.  Their
wedding cake was a gift from Lady Irene Congreve.  Muriel’s dress was white
charmeuse and she wore a picture hat and carried white roses with asparagus
fern.  They honeymooned in the South of Ireland and moved to Stewardstown in
Co Tyrone to live.

2            Robert Savage eldest son born 20 Sep 1914 at Corrbolis, Castlebellingham was a
gardener at Mount Congreve.  He died a bachelor on 18 Dec 1950 at Mount
Congreve and was buried at Killoteran cemetery.

3            Alfred William (Alfie) Savage 21 Feb 1917 at Corbollis, Castlebellingham. He was
an amateur actor with the Congreve players in 1930.  He married Esther Nolan
and worked for Henry Denny & Company in the 1940’s and they lived at Prague
Cottage, Love Lane in Tramore.  He was appointed manager of Redbreast
Preserving Company in 1953 and they moved to Tallaght.  The company went
bust in 1954.